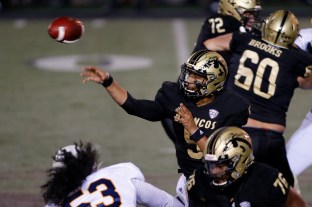 A shortened 2020 season may have limited his exposure on a national scale, but Eleby put together an impressive campaign in his first season as Western Michigan’s starter.

Eleby didn’t see any action in 2019 and played five games in relief as a backup in 2018, but any concerns regarding relative inexperience didn’t show up often last season, if at all. In six starts, he threw for 1,715 yards, 18 touchdowns and just two interceptions with a 64.7 completion percentage. With him under center, the Broncos averaged 41.7 points per game: the 9th-highest total in the FBS.

The 6-foot-1, 215-pounder has one of the strongest arms in the 2022 class, as his throws have significant zip behind them, and he is able to stretch the field and hits receivers deep with ideal ball placement. Eleby has polished mechanics, delivering passes with a compact throwing motion and good weight distribution in his lower half. He is able to throw passes with very good anticipation both inside and outside of the hashes, and he also brings sneaky mobility in the pocket and out in space.

Having a small sample size, there isn’t a lot of tape of Eleby looking past his first read or going through full-field progressions. He will need to prove capable of making those decisions, as well as fine-tuning his ball placement under pressure. However, Eleby looked the part of an early-round draft pick in 2020, and with a strong full season under his belt, he could be the next quarterback outside of the Power 5 to rise into the first round come 2022.

Tags: eleby he his