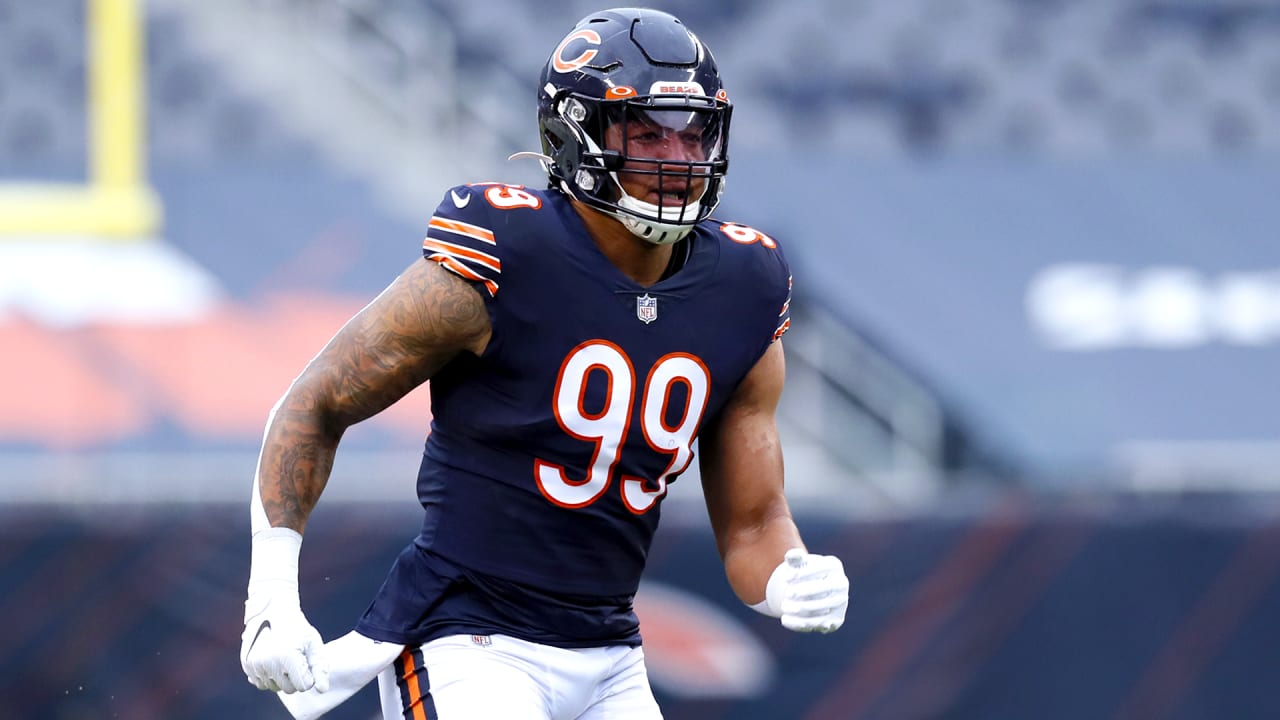 Gipson was a two-year starter at Tulsa, where he earned first-team All-American Athletic Conference honors as a senior after setting career highs with 49 tackles, eight sacks and 15 tackles-for-loss. As a junior, he registered 46 tackles, four sacks and nine tackles-for-loss.

“Trevis played defensive end a lot in a three-down front in college, so he was inside in a three-point [stance],” said outside linebackers coach Bill Shuey. “So bringing him outside and playing him in a two-point stance, that was the first time that he did a lot of those things.

“The other thing is that it’s not going to be easy to take something from a walk-through to a drill and get it to show up in a game. You need to rep that thing, you need to take mental reps and you need to be diligent in that.”

Gipson appeared in seven games as a rookie, registering five tackles and three quarterback hits while playing only 71 snaps on defense.

“Trevis is on the right path, but obviously he has a ways to go and he will tell you that,” Shuey said. “He’s working hard and he’s learning along the way. The key is, if you make a mistake, just don’t repeat the mistake.”

(2) With ﻿Eddie Goldman﻿ returning to the Bears after opting out of the 2020 season due to COVID-19, the team hopes the veteran nose tackle reverts to his pre-pandemic form.

“Hopefully with Eddie Goldman, it’s like riding a bike; he’ll just pick it back up and start pedaling again,” said first-year defensive line coach Chris Rumph Sr. “He probably won’t be able to pop any wheelies right now, but eventually he will be able to pop some wheelies.

Selected by the Bears in the second round of the 2015 draft out of Florida State, Goldman has appeared in 67 games with 63 starts over five seasons. He has recorded 153 tackles, 12.5 sacks and 17 tackles-for-loss. The 6-3, 318-pounder earned Pro Bowl alternate honors in 2019 after registering 29 tackles, one sack and two tackles-for-loss.

“Obviously, to get a guy who has some proven history in this league and played at a high level, that is exciting for all of us,” Desai said. “We’ve got to make sure he gets back and we see him play football because none of us have seen him play football in a year.”

(3) The Bears created continuity at the safety position last month when they re-signed veteran ﻿Tashaun Gipson Sr.﻿ to pair with ﻿Eddie Jackson﻿.

“What it’s going to allow is those two guys’ relationship is going to grow,” Desai said. “Just go through the history of football or any sport. If you want to be good—like those Bulls teams were good in the ’90s—they had the same players playing over and over and they were communicating with each other and that helps.

“When [Gipson and Jackson] are back there and they’re communicating and handling all of the coverage assignments, that helps because now they know how each other plays. They know what each other’s preferences are and how to take care of different issues on the back end, and I think that’s the biggest growth that we’ll see there.”

In his first season with the Bears last year, Gipson started all 16 games and tied for fourth on the defense with 66 tackles, tied for the team lead with two interceptions and also recorded five pass breakups.

Gipson preserved a Week 3 comeback win over the Falcons in Atlanta when he picked off a Matt Ryan pass with 1:06 remaining. Three weeks later versus the Panthers in Carolina, Gipson’s interception on the game’s opening series set up Nick Foles’ 9-yard touchdown pass to Cole Kmet that gave the Bears a 7-0 lead en route to a 23-16 victory.

Gipson entered the NFL with the Browns in 2012 as an undrafted free agent from Wyoming. He was voted to the Pro Bowl in 2014 after registering a career-high six interceptions.

(4) First-year inside linebackers coach Bill McGovern is excited about being able to work with ﻿Roquan Smith﻿ and ﻿Danny Trevathan﻿.

When McGovern was linebackers coach with the New York Giants in 2018, he traveled to Georgia to work out Smith before the draft. The Giants selected running back Saquon Barkley with the second overall pick; the Bears chose Smith at No. 8.

“I knew Roquan when he was coming out of college,” McGovern said. “I scouted him, went down there, worked him out, all that stuff. I obviously knew he was quite a talent. He was a guy that everybody in the profession knows who he is.”

Trevathan, meanwhile, remains an impact player as he enters his 10th NFL season and sixth with the Bears. Last year he compiled 113 tackles, the second highest single-season total of his career.

“I’m excited to work with Danny,” McGovern said. “His leadership is phenomenal, but it’s also his knowledge of the game and his understanding of the game. He’s intelligent. He’s sharp. He’s one of those guys who you’re anxious to get out on the field with.

“It’s great seeing it on the Zoom call and we’re seeing each other a little bit and talking about different things. But to be out on the field and actually executing a defense with what’s going on, that’s what I’m excited about to get to do. And Danny really can show you that he can make plays when he’s able to bounce around on the field really well.”

Tags: get he him