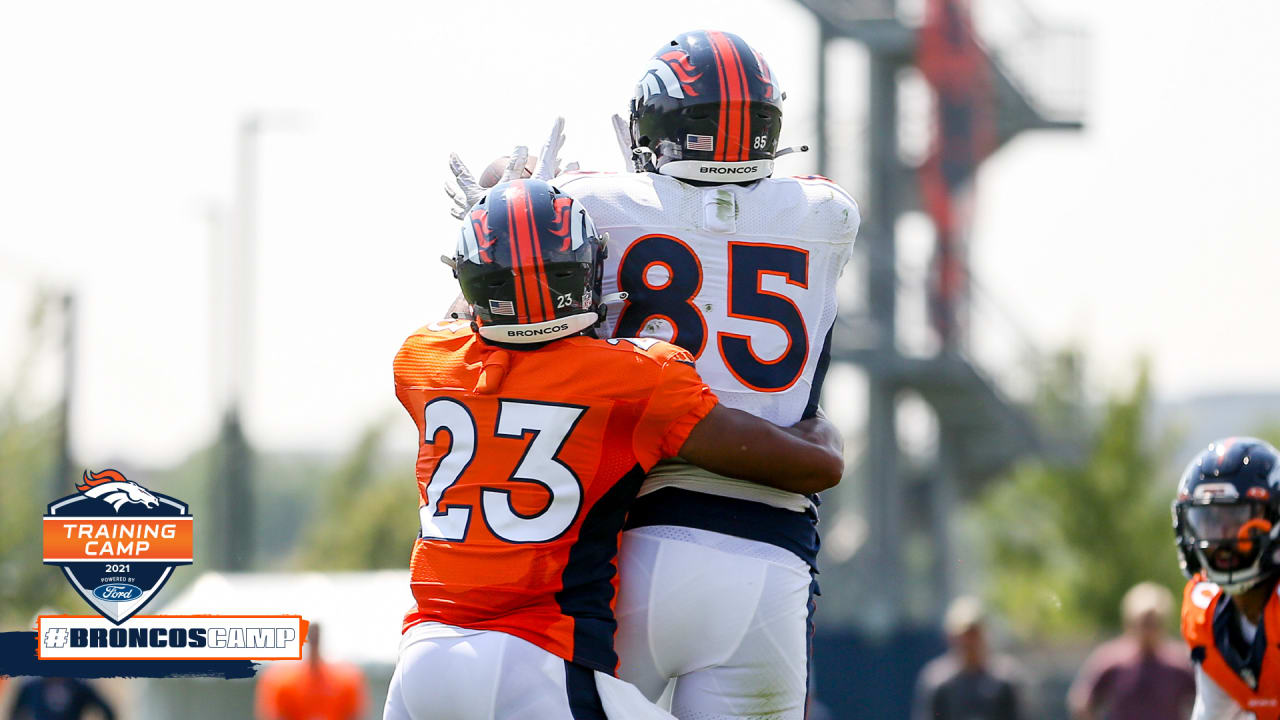 TIPPING FROM THE TRENCHES

While Jerry Jeudy turns in his almost daily highlight in his second training camp, another 2020 draft pick may have come up with the most impressive play on Friday.

Late in practice during a team period, defensive lineman McTelvin Agim burst through the line, shrugging off any resistance to force immediate pressure on Drew Lock despite a shotgun snap. Though Lock got the pass off, Agim jumped and brought his arms up to deflect the ball, which was then reeled in by Josh Watson for an interception.

“He’s having a great camp,” DeShawn Williams said after practice. “A lot of people think rookie linemen, defensive linemen, [are] supposed to come in and make an impact. It’s not that easy. You’re going against grown men. The speed changes, the strength changes, and he’s got that year under his belt and now you see everybody’s been bringing his name up. Man, he’s out there having a great camp, and I can’t wait to see him when we go against Minnesota to put it all together. He bust his tail this offseason, and it’s showing.”

With Mike Purcell recovering from an ankle injury, the defensive line has relied on its depth and youth for much of camp. Williams, who started 11 games in Purcell’s stead in 2020, has gotten an increased workload with the first-team defense again as Purcell heals, but he’s keeping the same mindset regardless of who lines up next to him.

“How we treat it, it doesn’t really matter about the ones and twos and threes because everybody [is] getting equal reps,” Williams said. “We don’t want to see one of our brothers go down because we know how hard Mike came back to be in OTAs and now to see him go down, but he just tells me every day [to] make it count.”

… Jeudy opened up the first team period with an eye-popping catch deep down the left sideline over the outstretched arms of a leaping Bryce Callahan. Though Jeudy later suffered his first drop of camp, he still had an impressive day, with that long catch as the clear highlight.

Fangio again cited Jeudy’s resilience from his struggles late in the 2020 season as a reason for why the second-year receiver has had such an excellent start to training camp.

“He’s carried that over to the offseason,” Fangio said. “Now you add in the intangibles, the things you can’t quantify — having an offseason, having a second year in the same system, going through OTAs and minicamp, all the meetings he’s been through, throwing with guys, being able to do things in person. You put that in there with his natural maturation level and the one he experienced between Week [16] and [17] last year, and this what you get.”

… In what’s become almost a regular occurrence during this camp, Trinity Benson came up with two more big catches for more than first-down yardage on Friday. Fangio said Benson’s experience as a practice squad member for the 2019 and 2020 seasons has helped produce this run of success.

“All that work is paying off,” Fangio said. “He’s in the hunt. Trinity always could run. Now, he’s a better receiver [and is] polished on knowing what to do and how to do it. He’s in the hunt with all those guys.”

… Fifth-round pick Caden Sterns secured his second interception of camp on a pass on Friday, tracking a deep ball that sailed just a bit beyond DeVontres Dukes on a throw down the right sideline.

“He’s doing well,” Fangio said. “He’s picked up the defense extremely well. He’s been able to advance it a lot quicker than your average rookie can at his position. I’ve been very pleased with the way he’s progressed in this camp and learned everything. One of the bigger, final tests for him — and we won’t know until we start playing games — is he has to be able to tackle. If he does a good job of tackling and he’s a reliable tackler, then I think we have a good player.”

Tags: camp he his