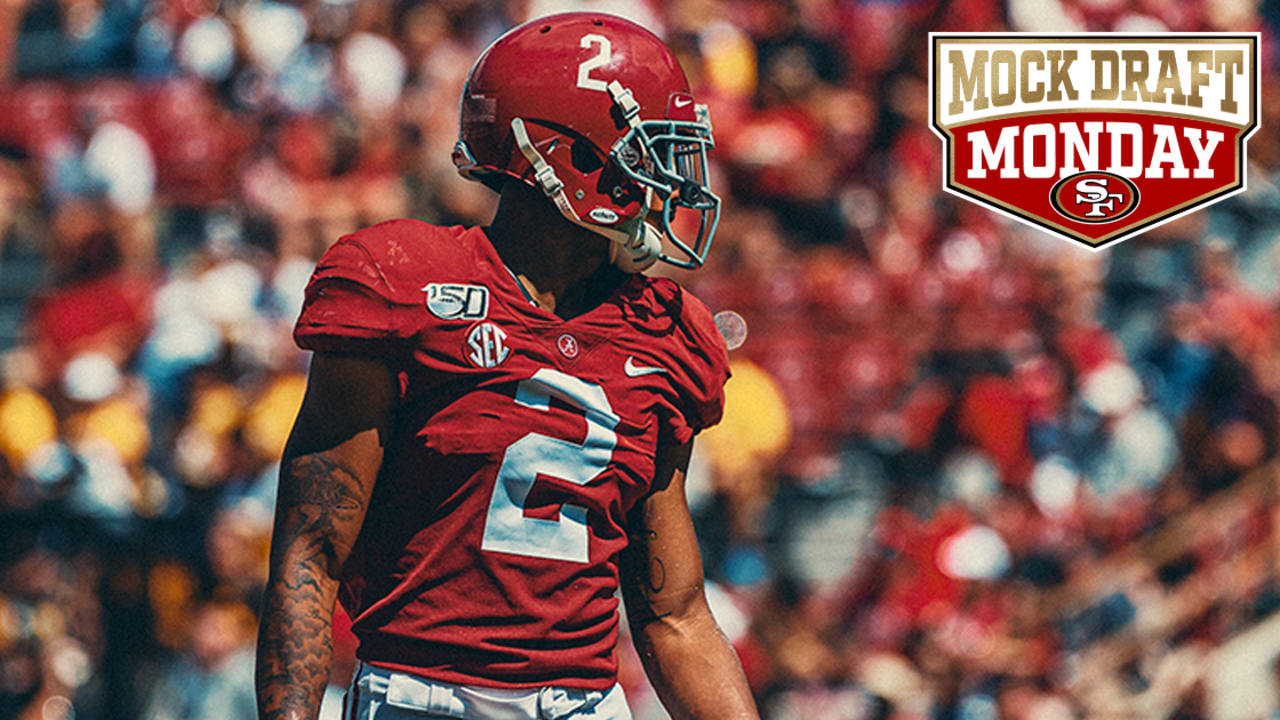 Absolutely love this pairing. Darrisaw is a wide, strong, athletic blocker who could eventually replace Trent Williams at left tackle.

My 49ers friends have been scouting the incoming quarterback class for months and it comes to fruition. Trey Lance is still a bit raw but his skill set in Kyle Shanahan’s offense would be exciting.

The 49ers don’t have any cornerbacks under contract for next season so saying cornerback is a need is an understatement. And in this scenario, need matches talent with Surtain II, who might not have elite speed or twitch but has NFL-ready cover skills and instincts.

Picking fourth is rarely ever bad, but it might not be the perfect spot for the Atlanta Falcons in this 2021 First Round NFL Mock Draft. Their needs don’t line up with the value on the board at all. Unless they want to find their Matt Ryan, Julio Jones, or Jake Matthews replacements early, it makes sense to trade this pick.

On the other end, San Francisco is a Super Bowl-ready roster that’s starving for average quarterback play. Justin Fields could present a major upgrade on what the 49ers have had at the position.

He might not be a dream fit for the scheme like Zach Wilson, but he’s close. Fields has a tremendous arm, terrific accuracy, and the athleticism to make almost any throw from any platform.

The move up to the fourth pick costs San Francisco the 12th, 43rd, and 96th overall picks from this year’s draft and a second-round pick next year.

Based on the information we currently have, it seems like Jets GM Joe Douglas and newly hired head coach Robert Saleh would rather trade out of the number two pick and collect more assets than take a quarterback. A full-scale bidding war will ensue once the trade becomes officially available, and the 49ers have the means and ability to pull it off.

A San Francisco team that is just one year removed from a Super Bowl berth is in a prime position to mortgage future assets in exchange for a quarterback perfect for Kyle Shanahan’s offense. They also have a solid relationship with the Jets’ new head coach.

In this trade, the 49ers get the second overall pick and use it on Fields. Meanwhile, the Jets net the 12th and 43rd selections in the 2021 NFL Draft, San Francisco’s first and third-round selections in 2022, and edge rusher Dee Ford﻿. In Ford, Saleh gets a capable and experienced pass rusher that his roster currently lacks.

The 49ers are risking it all on Fields hitting, but it’s a calculated risk that they’ve set themselves up perfectly to take. San Francisco already has the offensive firepower and defensive strength to compete for a playoff spot. The limitations of its quarterback have bottled up the offense. With Justin Fields, those limitations wash away. This team is a Super Bowl contender in year one with rookie Justin Fields.

The Dolphins are back at it as they look to trade further back. All three of the consensus first-round wide receivers are still on the board, giving the Dolphins the flexibility to move back. If they have a preference, then they would need to jump here to ensure they got their target. However, assuming they are satisfied with whichever of the three they get, this trade makes too much sense.

The 49ers are in an intriguing position. They need to save cap, and they have a QB who can be cut to save over $20 million in cap space. Even if they decide to stick with Jimmy Garoppolo﻿, adding a new QB seems imperative. We have already seen that Nick Mullens and C.J. Beathard are not the answer. Zach Wilson has improved his stock considerably in 2020 and now gets to be paired with Kyle Shanahan.