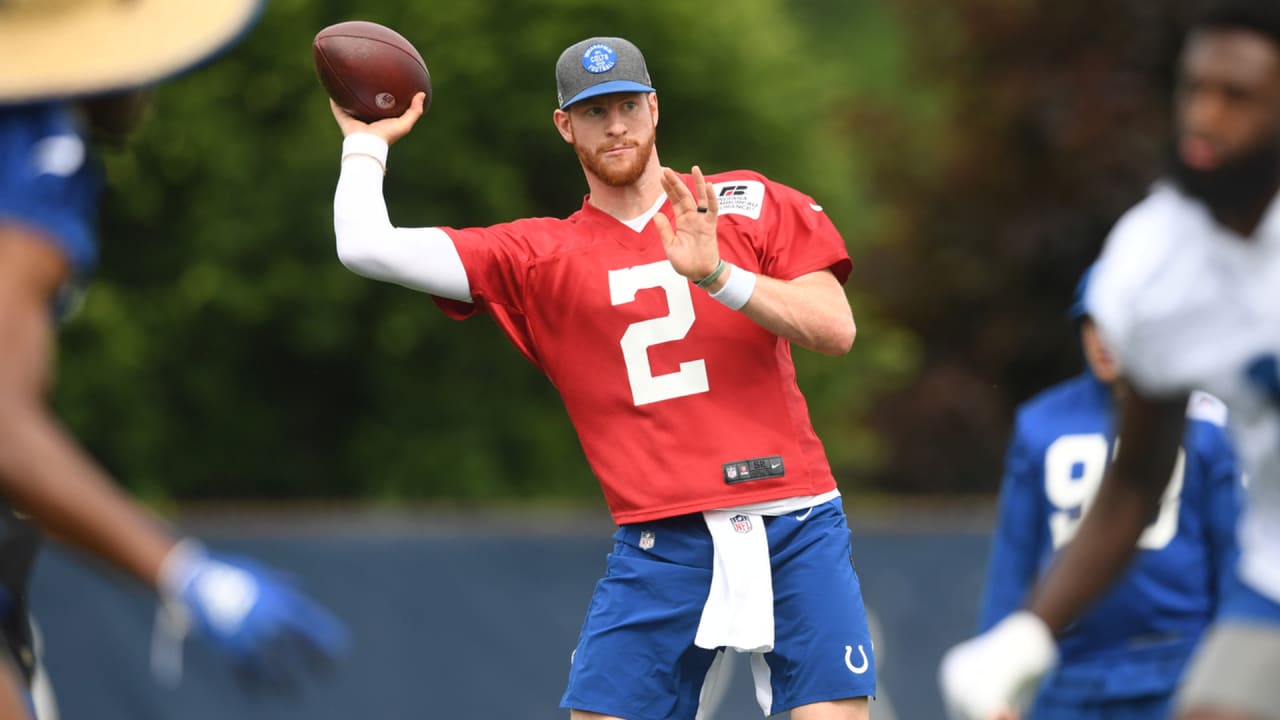 Michael Pittman Jr. arrived in Indianapolis last year as a rookie wide receiver paired with a quarterback going on his 17th year in the NFL. Philip Rivers had attempted 7,500 passes in his NFL career. Pittman was trying to get his first catch.

But while Pittman said he was initially hesitant to ask Rivers questions — how do you throw this route, where do you place the ball on this throw, etc. — the longtime veteran quarterback quickly taught the rookie wideout how to go about developing a rapport with the guy throwing him passes.

“Phil just taught me how to receive and correct information because Phil wants things how Phil wants things,” Pittman said. “So, I basically just learned that and I just took that from him and I do it now.”

Now is the operative word there. Pittman, along with his other pass-catching Colts teammates, have spent the last few months building chemistry with Carson Wentz. That process accelerated over the last two weeks, with Wentz and his new teammates practicing together at the Indiana Farm Bureau Football Center under the watchful eyes of the Colts’ coaching staff.

Zach Pascal, who’s working with his fourth different starting quarterback entering his fourth year in the NFL, explained why developing that rapport now is so important.

“It’s a lot of timing routes, a lot of things we have to be on the same page with the quarterback and that comes with reps,” Pascal said. “That’s how we get better over here. We gotta rep it, rep it, rep it and make sure everything’s crisp for the season.”

Every quarterback and every receiver have certain nuances to how they throw, run and/or catch different routes. The receivers have to learn how the ball comes out of Wentz’ hand. Wentz has to learn how a receiver comes out of his break. And timing is critically important.

It’s these details both Wentz and the Colts’ pass catchers are working to nail down before training camp so the offense can hit the ground running ahead of the regular season.

“T.Y. (Hilton) is a good example,” Reich said. “He’s got unique things that he does as a route runner and the instincts he has, so it’s important that gets communicated to the quarterback and what the receiver sees and so then as Carson or the other quarterbacks, when I hear what a receiver sees and thinks, it helps me understand how he’s going to respond in different situations.

“Now the truth of the matter is I think the quarterback gets the last say and is driving the ship a little bit more, but it is a two-way communication.”

Hilton, who’s entering his 10th year in the NFL, emphasized the importance of communicating with Wentz, too.

“Carson’s a great guy, easy to get along with, easy to talk to,” tight end Jack Doyle said. “So that makes it an easy transition.”

Wentz has made a point over the last few months to get to know his teammates on more than just a professional level, which has helped, too. Running back Nyheim Hines said Wentz frequently asks about family and other off-the-field things in his life, and developing those deeper personal relationships now is another one of those things that will help later.

“It’s natural — I enjoy getting to know guys and hearing their stories, their backgrounds, all of those things, especially this time of year,” Wentz said. “Obviously, there’s a little extra free time both in the building and outside the building, so just getting to know guys is something that I truly enjoy. The relationships I’ve made through football through my whole life are lifelong friendships and relationships and many of those guys are in this locker room now and I look forward to continuing to build those relationships both on and off the field.”

The NFL season doesn’t kick off for another few months, but plenty of important work between Wentz and his teammates has already been put in, and will be put in over the next few weeks before training camp begins. Wentz said he hopes to get together with his receivers at some point in both June and July to continue working to build chemistry.

Another important aspect of all this is how the Colts’ offense operates. It’s not centered around trying to get the ball to one or two guys on every play. There’s an emphasis on spreading the ball around, and that means having trust in everyone who might catch a pass on gameday during the 2021 season.

And the process of building that trust has been underway for months.

“There is just a lot of talent,” Wentz said. “There’s a lot of – I see it from watching the film from last year on how they really spread the ball around and get everybody involved. I see that completely being the same way again this year and that excites me because it’s never just a one-man show out there.

“I’m going to throw the ball where it’s supposed to go on each play and not necessarily just picking guys. Getting everybody involved, that excites me because everybody has a unique skillset and everybody is talented and we have the ability to spread it around and give everyone some love and be an explosive offense that way.”