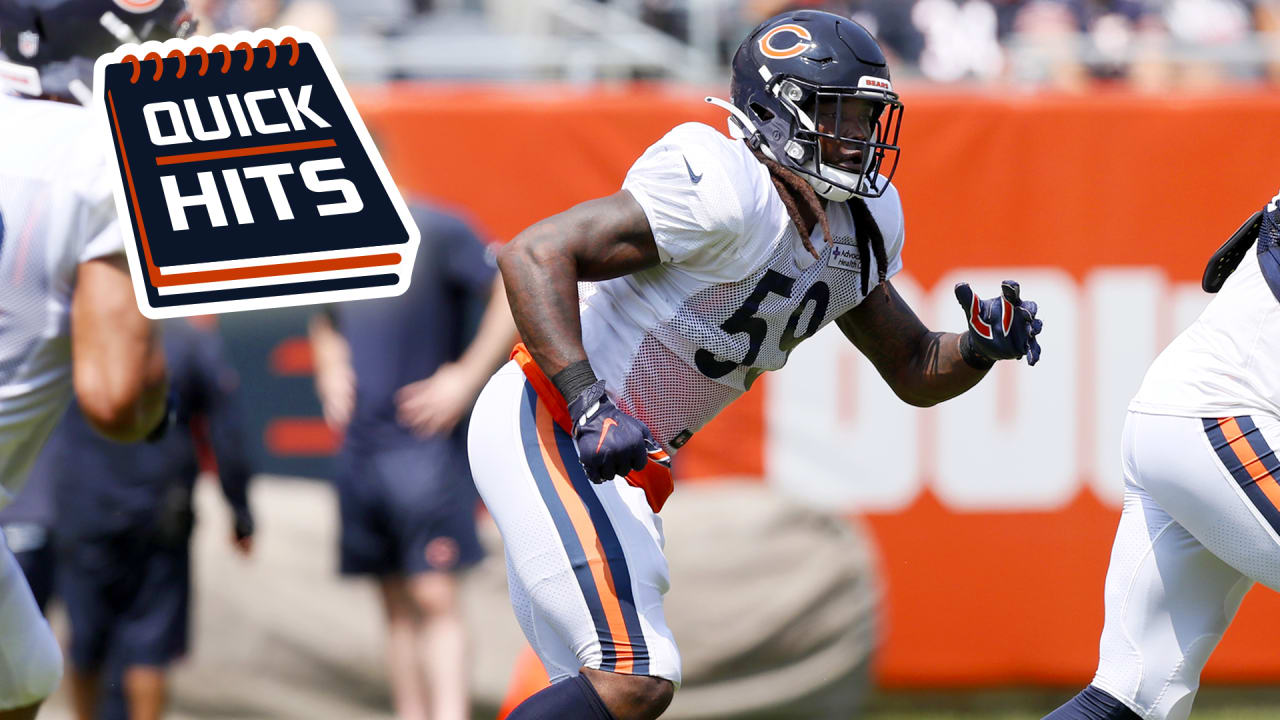 The Bears have been practicing with fans in attendance at Halas Hall since last Wednesday, but the Family Fest workout was special.

“I love the way it was today,” Trevathan said. “I was definitely happy to see fans back out there. It was so boring without them. It felt great to have them out there and we appreciate them coming.”

Game-day feeling: Coach Matt Nagy told reporters before practice that pulling up to Soldier Field in team buses, “you get that game-day feeling, which is pretty cool.”

No fans were permitted to attend any Bears home games last season due to COVID-19.

“Last year coming out to this stadium and having no one in there, it was crickets,” Nagy said. “It’s different; not fun. Like I’ve said, the fans are what make it. That’s what it’s all about.”

On the shelf: The Bears continued to practice without the two tackles many are projecting to start this season. Rookie left tackle ﻿Teven Jenkins﻿ remains sidelined with back tightness, while veteran right tackle ﻿Germain Ifedi﻿ is still on the physically unable to perform (PUP) list after injuring his hip flexor during a conditioning drill last Tuesday at Halas Hall.

Asked whether the absence of Jenkins and Ifedi is giving him anxiety, Nagy said: “It doesn’t give me anxiety, but it’s definitely something that we need to focus on and make sure we get that right. I mean, that left tackle spot is real. There’s going to be great competition. But it’s not anxiety because there’s ways we can help.”

Once Jenkins is able to practice, Nagy doesn’t anticipate a lengthy ramp-up period for the second-round pick.

“It won’t be real long because we want to get him going,” Nagy said. “But we want to be smart with it, which is kind of what we’re doing right now. Seeing him out there [Monday] in the afternoon working through some things [with head trainer Andre Tucker] was good. The sooner the better for us because we know every rep counts. He’s a rookie. He hasn’t been out there yet. In the meantime, we’ve got to make sure that other guys are getting opportunities. I think that’s what you’re going to start continuing to see here. You might start seeing a guy more like ﻿Larry Borom﻿ get some more shots over there and see that in practice.”

Opportunity knocks: As Nagy indicated, Borom did get reps at left tackle in Tuesday’s practice. The 6-5, 333-pounder was selected by the Bears in the fifth round of this year’s draft after he appeared in 33 games with 19 starts the past three seasons at Missouri.

Borom started all eight games he played in 2020 at right tackle after opening 11 contests in 2019—eight at right tackle, two at left guard and one at left tackle.

“He’s a big guy,” Nagy said. “He lost a lot of weight this offseason, and that’s a credit to him. I like his footwork. I think he’s really light-footed for being such a big man. I don’t know if he can play left tackle. That’s why we’re trying to put him there and see. It’s not easy when you go from the right side to the left side, but I think now is the time to see really what he can do.

“It’d be pretty cool [if] you draft a guy in the fifth round and end up having a guy that can do some good things for you, so we’re going to test him out.”

Goldman on COVID list: The Bears announced after practice that they’re placing nose tackle ﻿Eddie Goldman﻿ on the reserve/COVID-19 list. The sixth-year pro rejoined the team last week for the start of training camp after opting out of the 2020 season due to COVID concerns.

Tags: Fans there was