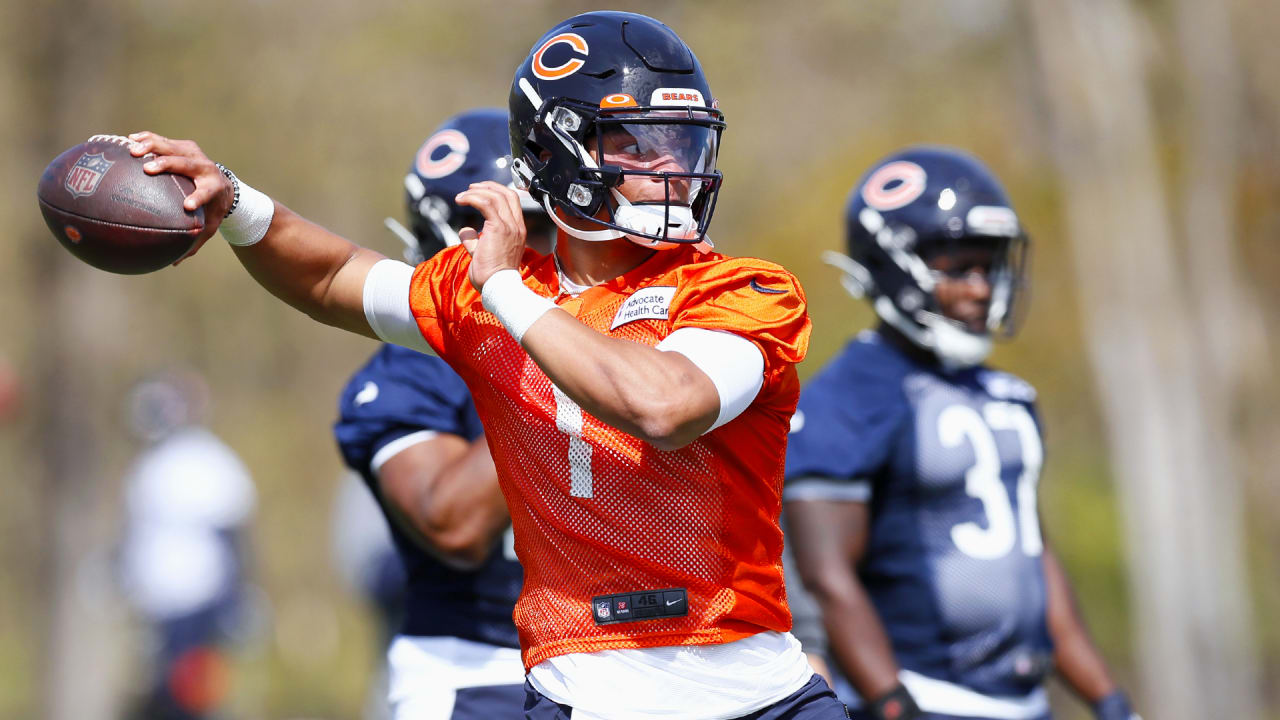 Fields exuded confidence, conviction and maturity both during practice and on a Zoom call with the media a couple hours before the workout. The 22-year-old explained that rather than looking too far down the road, he was instead focusing on “each day, each period, each play, on just perfecting that play and getting better.”

“My short-term goals are just to be crisp with the huddle call,” Fields said, “making sure I’m precise with my reads and stuff like that and really taking command of the huddle and show the guys out there that I am leading the offense. That’s pretty much the list of short-term goals I have down for this weekend.”

Since being drafted by the Bears, Fields has been studying the playbook and meeting via Zoom with Nagy, offensive coordinator Bill Lazor and pass game coordinator/quarterbacks coach John DeFilippo. Fields takes notes and quizzes himself by drawing formations on 5″ X 7″ flashcards.

“As time goes along, I’ll be getting more used to the playbook. I’ll eventually know it like the back of my hand. It’s just going to come with time.”

Fields demonstrated that he already possesses a grasp of the playbook Friday when he explained to a receiver, after a play, a route adjustment that needed to be made based on the pass coverage.

“I thought it was pretty cool,” Nagy said, “that already on Day 1 Justin was going over and in a coachable and teachable way was explaining to that player, ‘Hey, they changed rotation-wise. Next time that happens, you have to run this route instead of that route.’ Day 1, that’s pretty good.”

Fields said that the complexity of the Bears offense is similar to the one he operated at Ohio State, but there is one noticeable difference.

“At Ohio State, we did signals from the sidelines, so actually getting in the huddle and calling the play out is the only different thing,” Fields said. “Everything else is pretty much the same when it comes to concepts and stuff like that.”

Tags: fields he was