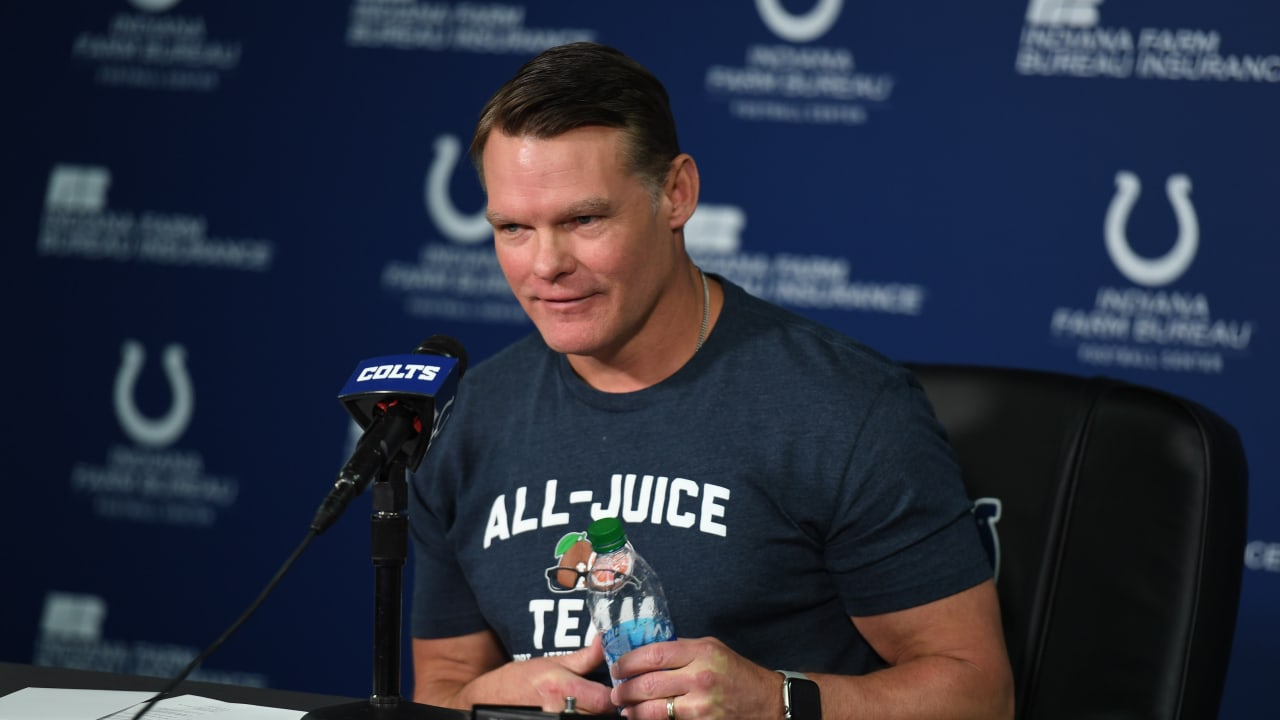 Ballard likes the competition the Colts are building on both lines.

2021’s NFL Draft will be a showcase for a deep class of offensive linemen — “as good as I’ve seen in a while,” Ballard said — which means the Colts will have options if they choose to address their left tackle spot via the pick.

But Ballard highlighted the signings of Sam Tevi and Julien Davenport, who combined have 72 starts over the last four seasons. The goal, Ballard said, is to get the best five players on the field, whoever they wind up being.

“We think they are good players,” Ballard said of Tevi and Davenport. “We will create competition at left tackle and we’ll get the best five players on the field. That’s the one thing about the offensive line that I think gets looked over sometimes, it’s different from any other group because they have to play as one, five as one, and they have to play together.

“It’s a unique group that we have. We’re very fortunate with the guys that we have. They all love to play, they work, they’re unselfish, they stand for everything we want to stand for. Adding in to that group, we want to make sure we have five good starting linemen, plus – you’re going to have points in the season where the six, seven, eight and nine are going to play. Lord knows we had it last year. So they are all important.”

On the defensive line, where the Colts lost Denico Autry in free agency to the Tennessee Titans and veteran Justin Houston remains a free agent, Ballard said he was encouraged by how Tyquan Lewis played in 2020. He also still has high hopes for 2018 second-round pick Kemoko Turay, who never was quite healthy last season and underwent an additional surgery early this year.

“We challenged (Lewis) and he accepted it,” Ballard said. “I thought last year he played really good and ended up having to go inside and play the 3-technique a bunch and both end spots. We’re excited about Tyquan. Tyquan is a good player.

“As for Turay, at the end of the day I think everybody sees Kemoko’s talent. He’s extremely talented. Those first four games I think it was in 2019, he was really good. Then he had a severe ankle injury. It was severe, and then he gets his surgery. COVID hits, so now the rehab process is set back a little bit and then he comes back and he’s still hurting a little bit. I blame myself for that because I should have just said, ‘You know what, let’s just make sure we get it right.’

“But the kid was fighting through, trying to do everything he can to play because he wants to play. Then when the season is up, he ends up having another surgery. This rehab is going a lot better. Circumstances have helped it because he’s able to come in and rehab every day. We think he’ll be ready, and I want to say be cleared to go by June.”

Still, adding to the O-line and D-line is important. But…

So it may seem “obvious” that the Colts will target a tackle and edge rusher in the NFL Draft. Most mock drafts have Ballard going that route.

But there’s a difference between having a need and actually filling it, Ballard cautioned.

“The one thing we won’t do, we won’t just force the issue, especially early in the draft,” Ballard said. “That’s when you make your biggest mistakes, when you just force the issue. If it so happens, (someone) falls and there is a player we like at either one of those positions, sure. I think you all know our philosophy on the fronts. You need eight to 10 offensive linemen and we feel you need eight to 10 defensive linemen.

“So we’ll continue to add fuel to the fire, but we are not just going to force the issue.”

More picks equals more chances to hit on a player.

One of the reasons why Ballard was ranked as the No. 1 drafting GM by NFL.com earlier this month is his success hitting on Day 2 and Day 3 picks, which he’s accumulated plenty of by trading down eight times over his four drafts.

Ballard re-iterated his draft philosophy on Friday, which does have flexibility if there’s a player he and his scouting staff really like, too:

“The more picks you have the better chances you get to – shots at the board,” Ballard said. “This is not an exact science and you need a little luck. Let’s be real here. I think we’re pretty good at what we do but there needs to be a little luck involved and the more picks you have, the more chances of luck are going to show up. That’s just a philosophy that we have in the draft. If we’re sitting there and there is a player that we really think is a difference-maker and he is going to really make a difference on our team, we’ll take him or we’ll trade up to get him.

“We thought Jonathan Taylor was a difference-maker and we traded up to get Jonathan Taylor. But there are times that we just felt that whether it was the fit of the player, medical issues of why we traded back, but we just thought at the time whoever was sitting there we could move back and acquire two or three players versus the one player at the time.”

There are plenty of good things happening with Carson Wentz.

It’s been a little over a month since the Colts made their deal for Wentz official. The Colts traded their 2021 third-round selection (No. 84 overall) and a 2022 pick to the Philadelphia Eagles for Wentz, meaning the Colts enter next week with only one Day 2 selection (No. 54 overall).

But so far, Ballard has seen nothing but good things from Wentz — even if being holed up in the draft room at the Indiana Farm Bureau Insurance Center means he hasn’t had much interaction with his new quarterback.

“It’s been good,” Ballard said. “He’s comfortable in his own skin. They are different. Their personalities are different, but he has a great sense of humor, doesn’t take himself too seriously. He’s dialed in. He works. I would probably compare him a little more to Andrew (Luck) than I would to Philip, but he’s been great to be around. I haven’t been around him a whole lot because I’m locked in that draft room the whole time, but he’s been great to be around. He has a great family, he’s got a great perspective on life. He is going to be a good player for us.”

Ballard, too, made note of the advantages the Colts have in Wentz’s strong relationship with coach Frank Reich. The team had a similar advantage a year ago in adding Philip Rivers, which helped result in an 11-5 season and playoff appearance.

“When you have a familiarity with the offense and the coaches coaching you every day, that automatically – there is going to be a comfort level there,” Ballard said. “It’s like last year when we didn’t have any of the offseason program, Philip came in, knew the offense. There wasn’t a lag in terms of him playing and understanding what needed to be done. It’s kind of the same way with Carson. He understands what Frank wants, he understands the offense. They have a very close relationship and that’s a good thing. That’s a good thing for us.”