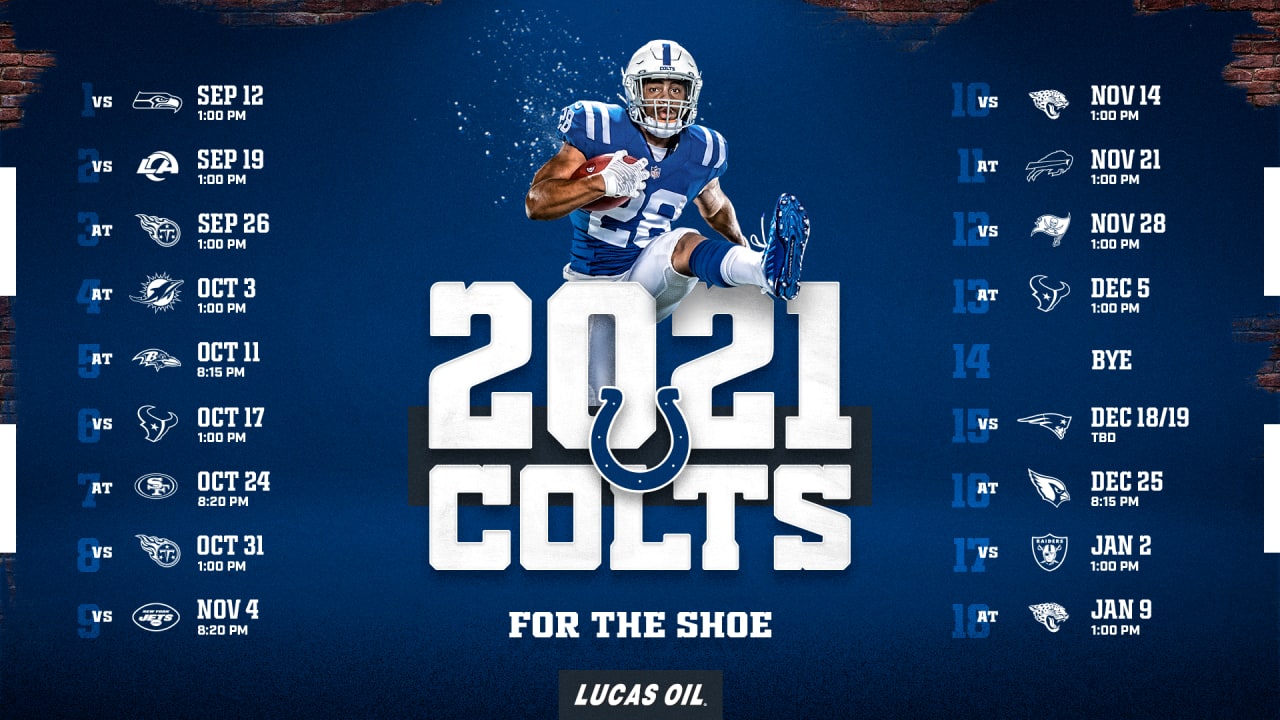 The Colts’ 2021 schedule is, literally, the biggest ever.

For the first time in league history, each team will play 17 games, with the Colts adding a home date against the Tampa Bay Buccaneers in Week 12 as part of the NFL’s expanded regular season.

In 50 words or less: The Colts have dominated their all-time series against the Texans in Indianapolis, with half of those 16 wins coming by 12 points or more. This’ll be new Texans coach David Culley’s first meeting with the Colts.

In 50 words or less: We’ll see if incumbent Jimmy Garoppolo or No. 3 overall pick Trey Lance is starting this game. Kyle Shanahan’s 49ers have high ambitions after an injury-plagued 2020 season, which followed a Super Bowl appearance the year prior. This’ll be DeForest Buckner’s first game against his old club.

In 50 words or less: The Colts will be done with the Titans before the halfway point of the season — this after last year the Colts and Titans played in Week 10 and Week 12. Notable: Two AFC South teams have made the playoffs in each of the last four seasons.

In 50 words or less: The Jets went all in on BYU QB Zach Wilson with the No. 2 overall pick in 2021 NFL Draft after hiring former 49ers DC Robert Saleh as their coach earlier this year. Xavier Rhodes and T.J. Carrie both had pick-sixes in last year’s meeting with the Jets.

In 50 words or less: Trevor Lawrence will make his first trip to Lucas Oil Stadium, but it will hardly be Urban Meyer’s first trip to the home of the Colts — the former Ohio State coach led the Buckeyes to four Big Ten Championship Games in Indianapolis.

In 50 words or less: The Colts came awfully close to beating the Bills in the 2021 AFC Wild Card round and will look to a strong returning core, new quarterback Carson Wentz and a boosted pass rush to avenge January’s defeat.

In 50 words or less: Bruce Arians’ defending Super Bowl champs return nearly every key player from their Lombardi-lifting team in 2020 plus OC Byron Leftwich and DC Todd Bowles. Of course, this game means the Colts will once again face Tom Brady, who’s 15-4 lifetime against Indianapolis in his Hall of Fame career.

In 50 words or less: This’ll be the first time in 13 years the Colts and Patriots will play without Tom Brady on the field. The Patriots added TEs Hunter Henry and Jonnu Smith, DE Matt Judon and WR Nelson Agholor in free agency, then drafted QB Mac Jones 15th overall this year.

In 50 words or less: Merry Christmas! The Colts will play their fourth and final scheduled primetime game in the desert against Kyler Murray and the Cardinals. The last time the Colts played a home Sunday night or Monday night game was 2015.

In 50 words or less: The Raiders’ loss to the Colts last year started a three-game losing streak that kicked Las Vegas out of playoff contention. Jon Gruden and Mike Mayock bolstered their defense in signing DE Yannick Ngakoue and drafting S Trevon Moehrig this offseason.

In 50 words or less: This is the third straight year the Colts will end the season against the Jaguars. The Colts are 8-1 in season finales since 2012.