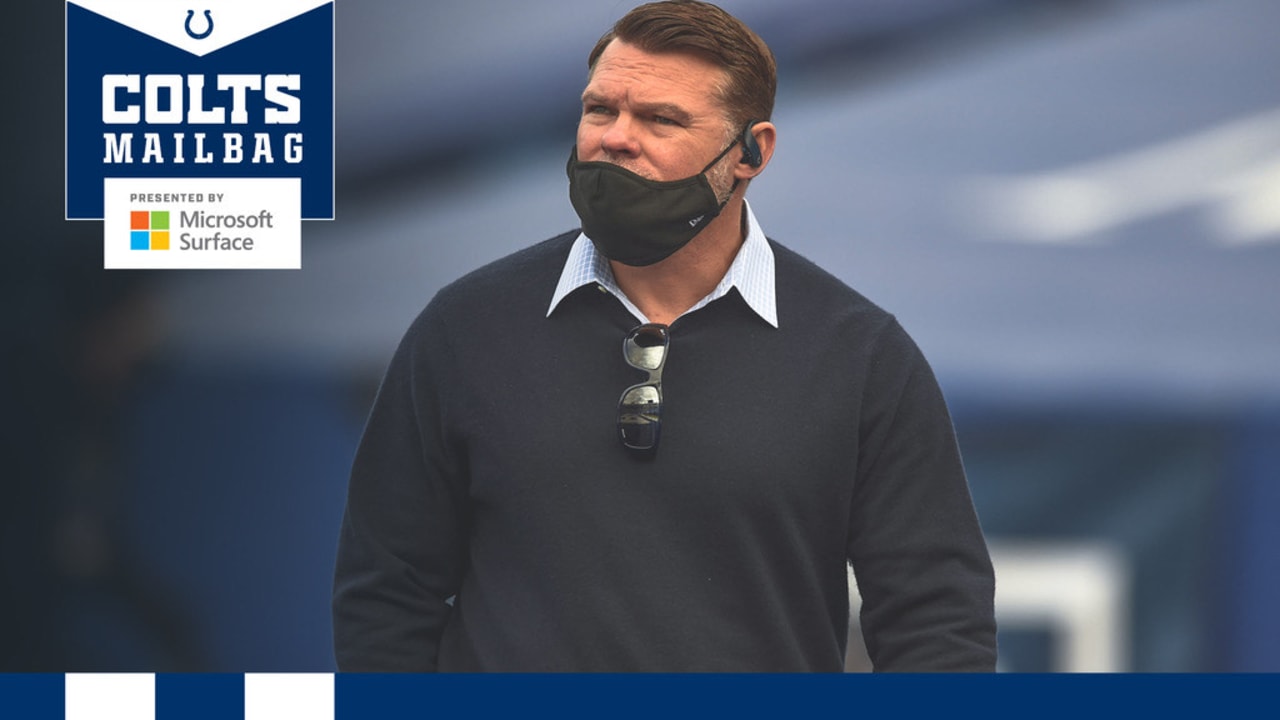 Tom Walters, East Greenbush, N.Y.: With the depth at many of the positions of need that the Colts have, it looks to me like another year where Ballard would willing to trade down or out of the first round to acquire and extra pick or picks. Would you agree?

JJ Stankevitz: The Colts have the No. 21 pick in this year’s draft, and have traded back with their first pick twice under Ballard. In 2018, the Colts traded back from No. 3 to No. 6 with the New York Jets and picked guard Quenton Nelson; in 2019, Ballard sent the No. 26 pick to Washington for the No. 46 pick and a 2020 second-round pick (that turned into wide receiver Michael Pittman Jr.).

In 2019, though, the Colts had the 34th overall pick (stemming from the 2018 trade with the Jets), so while they moved back 20 picks in the trade with Washington, their first selection only was bumped back by eight picks.

But Ballard has traded up on Day 2 twice — snagging second-round picks to draft defensive lineman Tyquan Lewis and running back Jonathan Taylor — so if there’s a player he, the Colts’ coaches and scouting staff really like, he’s shown a willingness to be aggressive to get him.

I think this all depends on the evaluations the Colts have on the prospects in this year’s draft, and where they believe those players will be available to be picked. Yes, the Colts have needs; so does every other team. Can those needs be filled by trading back and accumulating more picks? Or can they be filled by trading up for the right player? Or by simply standing pat? We’ll find out next month.

James Garwood, Huntington, Ind.:What does the future hold for (T.Y.) Hilton, (Marlon) Mack, and (Justin) Houston? I personally would love to see all three return.

JJ Stankevitz: All three are unrestricted free agents and are currently allowed to negotiate contracts with other teams (we’re in the NFL’s legal negotiation window, which runs until 4pm Wednesday, at which point the new league year begins and contracts can be executed).

Stay tuned to our free agency tracker for the latest news on all the Colts’ free agency moves.

Jim Irsay, Chris Ballard and Frank Reich have said they want Hilton back, but the contract has to be right for both the team and player. Hilton is an unrestricted free agent for the first time in his career, and has said he’s looking for one final contract before he retires. We’ll see what happens in the coming hours and days.

“It will play itself out, but I’m not going to lie, the discussions we’ve had – I would just echo what Mr. (Jim) Irsay said and what Chris (Ballard) said in an interview or two,” Reich said earlier this month. “I think we’re all hoping and optimistic that there is a way that T.Y. (Hilton) can end his career as a Colt. He’s a special player, he means a lot to us as an organization, but we all understand that there is a business side to it that has to be right. It has to be right for T.Y., it has to be right for the Colts. I’m just hopeful that that can play out. T.Y. has been a great player here, he’s a leader on this team and I hope the business side of that can get worked out to where he can end his career as a Colt.”

The Colts do have good depth at running back with Jonathan Taylor, Nyheim Hines and Jordan Wilkins returning. Could Mack, who suffered a season-ending Achilles’ injury last September, still be a part of that? Here’s what Ballard said in January:

“Marlon Mack broke my heart. That sucked. That was hard. Really hard. And it was hard on him, but he’s so tough-minded. I watched him work his butt off here all season to get back.

“Marlon Mack deserves a contract unequivocally. He deserves a good contract. I don’t know if we are going to be able to do that here. Saying that, I’m not going to say that ‘Marlon is not going to be back,’ because I think he’s really special as a player and I could just see a backfield of Marlon, Jonathan (Taylor) and Nyheim (Hines) and (Jordan) Wilkins be really special. So I’m not going to discount it, but I think Marlon Mack is a great player and deserves what he has coming to him. And he’s even a better teammate, unselfish, everything you want.”

We’ll see what happens with the 32-year-old Houston, who had 19 sacks in 32 games with the Colts in 2019 and 2020. Edge rusher is always a sought-after position in free agency, after all.

Cody Sellers, Largo, Fla.: With so much talent at RB, what is the likelihood of moving Hines to slot WR?

JJ Stankevitz: Hines is already one of the more heavily-used running backs in the pass game in the NFL. He had 63 catches on 76 targets for 482 yards last year, all third among running backs (behind Washington’s J.D. McKissic and the Saints’ Alvin Kamara). For what it’s worth, no running back had a higher receiving grade from Pro Football Focus than Hines in 2020.

However, per PFF, only 8.9 percent of Hines’ snaps on passing plays came in the slot last year. I’ll say this: Reich, Marcus Brady and the Colts’ offensive brain trust will continue to put Hines in the best position to succeed.

Also, there’s rarely a case where a team has too much depth at a position in the NFL. Attrition happens and the best teams are able to roll with it — like the Colts did last year after Mack’s injury.

Christopher Sheets, Orlando, Fla. Hi, longtime Colts fan back to ’84. What in the world are the Colts gonna do regarding running back? I remember the Dickerson, Bentley days but this is so much more difficult in my mind. Both the mentioned backs complemented each other and obviously the first mentioned was a Hall of Fame player but the second was such a special player.

Now we/the Colts have at least three what I personally consider to be elite backs. How do you decide who to keep? I believe it’s financially impossible to keep them all and I hate the thought of losing any of them. An insight on how the organization plans to handle this situation? It’s crazy but we/the Colts are even deeper. Wilkins is also a special player so just interested how this will be handled. Go Blue!

Hines and Wilkins will be unrestricted free agents after the 2021 season, while Taylor’s four-year rookie contract expires following the 2023 season. We’ll see how the Colts handle this situation over the next 12 months.

Christian Hornsby, Pontiac, Ill.: First time writing in, love reading the articles! I have two questions. With all the releases happening and cap space the way that it is, do you think Ballard pulls the trigger on some one year deals? And who are your preferred options, especially with Nelson, Smith and Leonard needing new contracts in 2022, I think this is the perfect year for Ballard to switch up his approach. Second question, do you think we will see a big change in power teams with the cap casualties. Especially teams like the Saints, Chiefs and Rams. I think we’re gonna see quite a few near teams in the playoffs next year, especially in the NFC.

JJ Stankevitz: On the first question, you bring up a good point about potential contract extensions for Nelson, tackle Braden Smith and linebacker Darius Leonard. Those need to be considered when looking at how much cap space the Colts have. Maybe shorter-term contracts make sense, but remember that unused cap space rolls over year to year, so it’s not necessarily the only strategy that would work. And I can say coming from working in a different NFL city that the Colts are highly regarded around the league for how they conduct business.

On the second question, I think the lowered-salary-cap blood-letting that a lot of folks expected didn’t totally come to fruition. Yes, there were a number of prominent players released as part of various teams’ cap crunches, but I think it’s still fair to expect those teams you mentioned — the Saints, Chiefs and Rams — to still be awfully competitive in 2021.