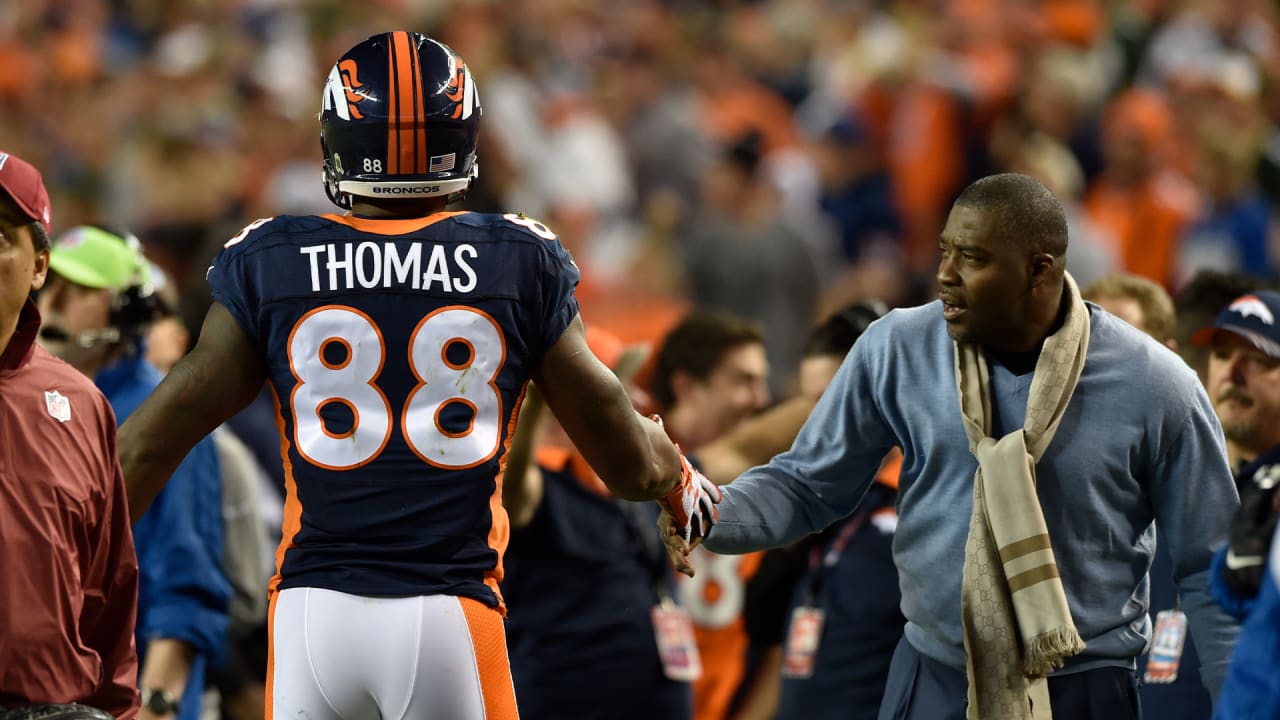 The Denver Broncos have fans by the legion who make up Broncos Country, tried and true, orange and blue, the envy of many other franchises.

And it was great to see wide receiver Demaryius Thomas retire as a Bronco a few days ago. It just seemed right, as he had so many great moments in a Broncos uniform.

He retired with praise from the media, fans, former teammates and opponents alike, but he also retired with a great distinction that is sometimes overlooked.

Ring of Famer Rod Smith is the Broncos’ all-time leader with 849.

Ring of Famer and Pro Football Hall of Famer Shannon Sharpe is second with 675 receptions.

And Ring of Famer Lionel Taylor is the fourth member with 543.

This is a great list, as it represents all of our Super Bowl championships, in addition to more than 500 individual receptions.

Smith and Sharpe were both members of our consecutive world championship teams in 1997 and 1998 (Super Bowls XXXII and XXXIII), while Thomas of course was a key member of our Super Bowl 50 team.

Taylor was with the Broncos at the beginning, and even though he never played on a winning team, he set franchise records that lasted 40 years in modern pro football.

He was the first player in pro football history to ever catch 100 passes in a season (1961), the first Broncos player to reach 500 total catches, and led the American Football League in catches in five of the league’s first six years of existence.

This is some great company that Thomas is in, and while it is too early to say what career honors Thomas might have, it would not be hard to imagine him in the Denver Broncos Ring of Fame someday.

That group of four is representative of how players are acquired by a franchise.

Thomas was a top draft choice by the Broncos and played as he was expected to, a great first-round player for his entire career.

Sharpe was selected in the seventh round (the 192nd pick overall), came to the Broncos with a chip on his shoulder and kept it there for years as he advanced the team’s success and his personal statistical history.

Smith was an undrafted free agent from Missouri Southern, and he too came to the Broncos with both enormous skill and a fierce determination to show every other team in the National Football League that they made a huge mistake both in not drafting him and then in not signing him.

And Taylor was not even a pass receiver of note in college at New Mexico Highlands.

He joined the Chicago Bears as a free agent linebacker in 1959 and played defense sporadically, was released in 1960, and in one of the most amazing career paths in pro football history, then joined the Broncos as a wide receiver and became a player of legend.

Known as having the best hands in the AFL, Taylor was recently named by the Talk of Fame Network’s AFL “Call to the Hall” committee, of which I was a voter, as one of the 10 greatest American Football League players not already in the Pro Football Hall of Fame.

Upon retirement, Thomas was asked about his three greatest memories.

He said they were his first touchdown as a Bronco, his fabled 80-yard catch-and-run touchdown reception from Tim Tebow in the 2011 wild card playoff game, and of course our great victory in Super Bowl 50 four years later.

That is quite a list, but every one of those four has a similar list, as championships are not the only measuring stick for greatness.

Showing up for every practice, playing every practice as if it was a game, and then playing on Sunday like the best receiver in football, game after game and year after year, setting an example of the field and leading one’s teammates off the field, those too are part of the measuring stick of greatness.

Demaryius Thomas did all that and more, and he joins Shannon Sharpe, Rod Smith and Lionel Taylor as the only Broncos who did it and caught 500 career passes along the way.