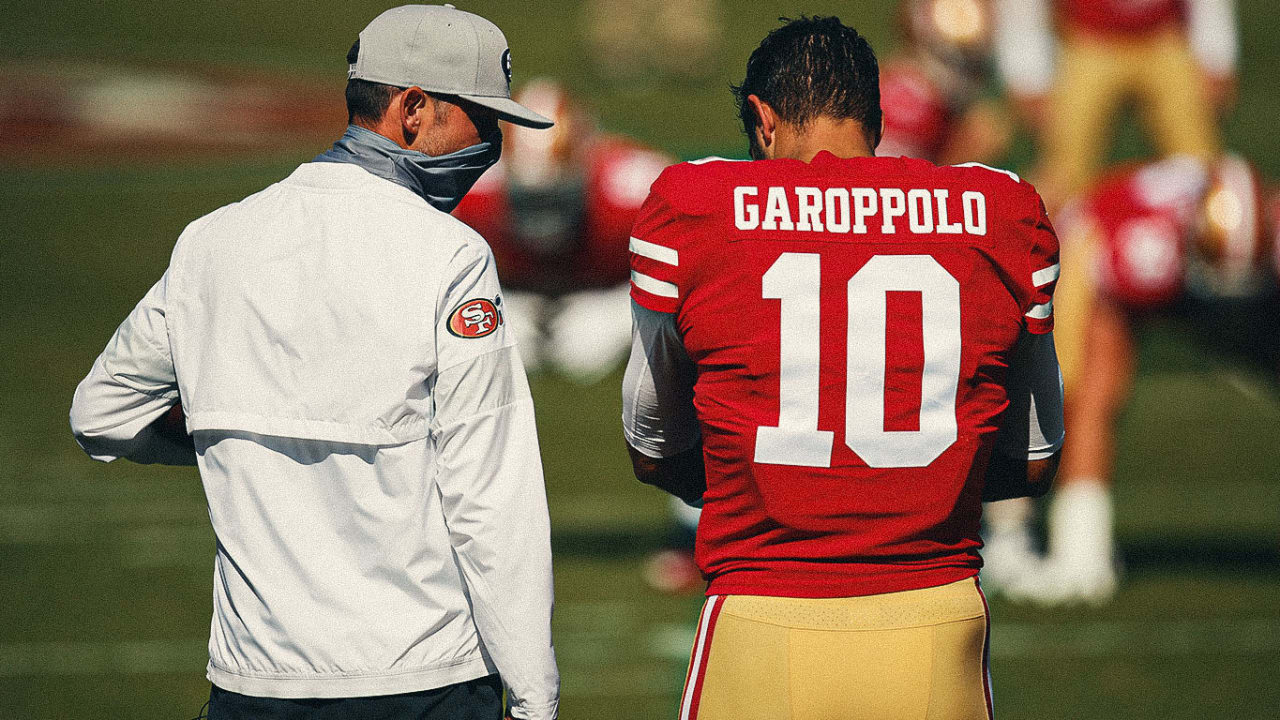 They say availability is the best ability in the NFL. That hasn’t been the case for the San Francisco 49ers as of late. Over the past three seasons, quarterback Jimmy Garoppolo has missed 23 games due to injury. In those seasons where Garoppolo has missed more than half of the 49ers contests, San Francisco owns a uninspiring 10-22 record. On the flip side, the team has seen a complete reversal in production when the quarterback is on the field.

Needless to say, the 49ers believe they can win with Garoppolo. But according to the team’s recent moves, they also don’t want to gamble on his availability.

“I think a hard decision for us too is when you’ve committed what we did to Jimmy, and you’ve got a guy who’s really only played one year of football. You look at the numbers he had, how efficient he was and how close we got to winning the Super Bowl. He’s got a lot of untapped potential,” Kyle Shanahan said in a joint press conference with John Lynch on Monday. “We’re not giving up on Jimmy because he can’t play or anything. Jimmy can play. He’s only gotten to do it one year. We like the person, too. We also know we can’t go through a year of what’s happened two out of the last three years. So, that’s something we had to protect the organization with and there’s lots of ways to go into that, but it wasn’t just a slam dunk decision.”

Shanahan and Lynch put to rest some of the speculation behind their massive trade last week. On Friday, the team made a blockbuster trade with the Miami Dolphins that shipped off three first rounders and additional draft capital in exchange for the No. 3 overall pick. It’s no surprise the 49ers engaged in a trade of that caliber specifically to nab a quarterback in the first round of next month’s draft.

This year’s draft is front loaded with optimal quarterback talent, but given the landscape of the NFL, the 49ers brass believe that a move of this caliber was necessary in order to be a player in the QB sweepstakes.

“We felt pretty strongly that we were going to get left at the altar sitting there at 12,” Shanahan added. “The way we think this draft is going to go because of the way all these candidates are and the way lot of teams are in a position trying to take a risk to fill that need. Almost every team is in that position except for 10 of them. Yeah, it’s a risk, but every season in this league’s a risk.”

Added Lynch: “One thing I always remember that Bill Walsh used to talk about a lot when I was at Stanford was, you’ve got to beat your opponent to the punch. We felt like it was a matter of time before the first domino fell, and we wanted to be a part of that once we decided this was something we wanted to do, and maybe pay a little bit of a premium for that. We felt like this was a priority. This was a priority for our football organization going forward.”

Of course, a move of this magnitude has drawn an array of questions on Garoppolo’s future in San Francisco.

San Francisco owns a 22-8 record with Garoppolo starting under center (24-9 including the postseason), including leading the team to the 49ers first trip to the Super Bowl in eight seasons. Since the close of the regular season, the team has gone on record (on multiple occasions) upholding their stance on the quarterback. Despite his availability, San Francisco has remained bullish on Garoppolo, and regardless of draft outcome, the 49ers have remained steadfast on their commitment to him being a part of their future plans.

“We’re in a situation where when you bring in a rookie quarterback, to me, it’s always better, especially on the team that you have,” Shanahan said. “You’ve got a veteran starter there already who you like and you’re comfortable winning with. That’s usually the direction you want to go and not to throw someone else out into the fire until they’re fully ready. And that’s the situation we’re at.

“But right now, it’s going to be hard to find a quarterback that gives us a better chance to win than Jimmy, especially a rookie in the draft.”