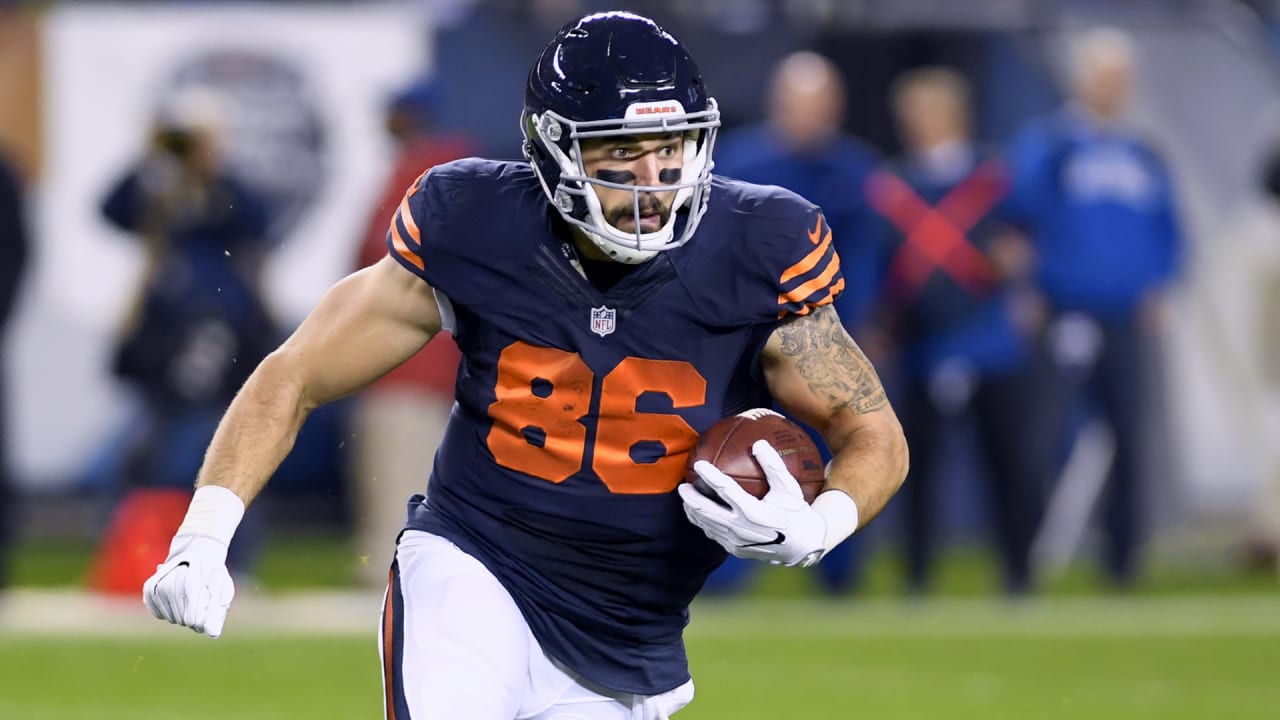 Miller traveled a unique path to the NFL. A quarterback at Nebraska-Omaha, he was immediately converted to tight end after being selected by the Jacksonville Jaguars in the sixth round of the 2009 draft. His only experience at his new position in college came in the Cactus Bowl, a Division II all-star game.

Miller appeared in 66 games with 33 starts over three seasons with the Jaguars, catching 45 passes for 470 yards and four touchdowns. But he missed the next three years due primarily to injuries.

Miller revitalized his career with the Bears in 2015, catching 34 passes for 439 yards and five touchdowns. He followed in 2016 with 47 receptions for 486 yards and four TDs. But midway through the 2017 season, he sustained a devastating injury during a game in New Orleans that nearly cost him his leg and ended his NFL career.

Looking to fill a significant void without football in his life, Miller turned to music.

Miller has written about 30 songs. He recorded “How Ya Like Us Now” in Nashville at Dark River Studios, which is owned by his friend, Colt Capperrune. Miller has since performed publicly twice—May 1 and 7 at The Good Life Sports Bar and Grill near his home in Omaha.

Prior to that, Miller played his music for friend and former Bears teammate Jay Cutler, who stopped at Miller’s home in Nebraska during a cross-country car trip.

“That was actually one of the first times I played music for somebody outside my family,” Miller said. “Jay was like, ‘What do you mean you’re writing and doing all of this stuff? I want to hear it.’

“I was actually kind of nervous because you want people to like it. We sat down and jammed all night long. He was like, ‘That’s good, slow this down,’ and now Jay’s on my listening panel. If I write a new song, I’m sending it to him for his insights because I know one thing: he’ll be honest with me.”

Miller is pictured on the cover of “How Ya Like Us Now” running on the beach with his wife, Kristen, the mother of their children ages 11, 9 and 3. The former Bears tight end is grateful for the support he’s received from Kristen, both during his long recovery from his gruesome leg injury and now that he’s releasing his first single.

Perhaps the most impressive aspect of Miller’s new endeavor is that he taught himself how to play the guitar by watching YouTube videos and reading books. His journey began when he received his first guitar as a Christmas gift from a friend while attending college.

“It’s like golf,” Miller said. “You can golf like crap all day long, but if you hit a good shot, you’re going to come back. That’s how the guitar was for me. It took me a while to get through the growing pains of learning—and I still have so much more to learn—but now at least I can put some songs together and play open chords and bar chords and compose music.”

Miller is clearly comfortable sharing his music, but that wasn’t always the case.

“It was more so just something I loved to do,” he said. “It was a hobby. It was a way for me to just kind of disappear from everything, from football, from all that stuff, just go sit down and play the guitar. It was just a hobby and I really just enjoyed doing it—and it turned into something more.”

Miller’s face lights up when he’s told that Bears fans frequently ask about how he’s doing after suffering the gruesome leg injury.

“That’s just how it goes. I look at it that I’m lucky to be where I’m at as opposed to not having a leg or what it could have been. I choose to [view] it in that light and carry on.”

Tags: he his miller