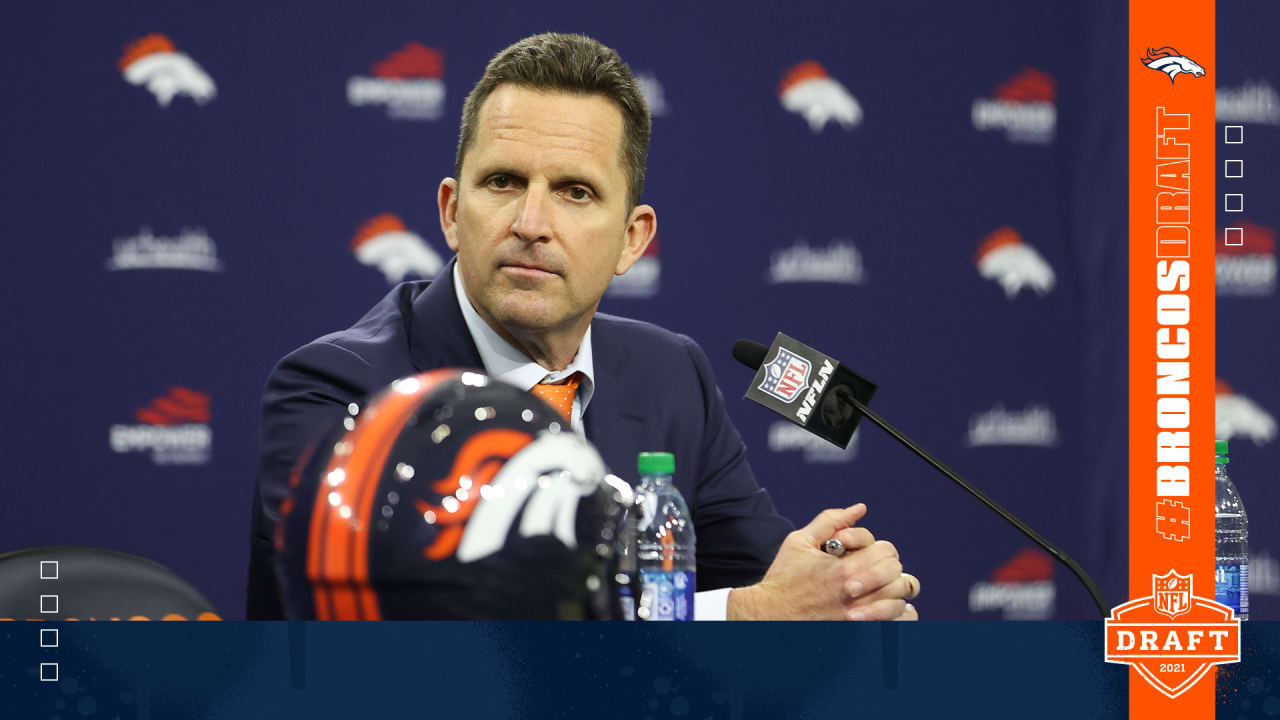 Paton, though, said the move was necessary regardless of how it turned out.

“I just think that you need to take a chance every now and then,” Paton said. “You need to accumulate picks. It gives you more flexibility.”

The Broncos gained that flexibility by adding picks, and they may have also gained it through the positional versatility that both Meinerz and Browning offer the team.

Head Coach Vic Fangio said Meinerz would cross-train at guard and center, while Browning could play at either inside or outside linebacker.

Meinerz, a Division III player, made a late surge up the draft board despite Wisconsin-Whitewater cancelling their 2020 season due to COVID-19 concerns.

“We had to go back two years ago when he was 20 pounds heavier, he had a neck roll and he kind of looked like a hunchback on tape,” Paton said. “He dominated the competition, but the competition was around Vic’s size. It was hard to evaluate until we went to the Senior Bowl. He lost 20 pounds, he was in shape and he fared well against elite competition. When you evaluate that, you interview the kid, you get his background. He ran a 4.89 or 4.9. [He’s a] really good athlete, loves the physicality of the game. I think that he is going to fit in with our group and [Offensive Line] Coach [Mike] Munchak. He has a lot of upside.”

Fangio said he hopes adding Meinerz to an offensive line room that already includes incumbent starters Dalton Risner, Lloyd Cushenberry III and Graham Glasgow will “[bring] the best out of everybody.”

Browning, meanwhile, provides the Broncos with a possible three-down linebacker. Fangio said the team would likely start workingBrowning at inside linebacker for base downs and later determine where to play him on third downs when the team uses its sub-packages.

“He is the type of athlete that in obvious passing situations, we have some freedom and flexibility where we put him,” Fangio said. “Then more of non-obvious downs such as first and second down, I think we’ll try him inside first, but not for sure. If it’s not working out, we’ll move him outside and maybe even cross-train him.

“I’d like to give him one spot when he gets here in the base package and work him around in the sub-packages to get a better feel for him.”

Fangio said the team liked Browning’s speed and athleticism, and he believes Browning has the skill set to rush the passer. Paton acknowledged his potential was too good to pass up, even as teams tried to trade with the Broncos late in the third round.

“We had the last pick in the third round, and we had a lot of action on that pick, but Baron Browning was too special to move back,” Paton said.

As Browning finds and fights for a role as a linebacker, he’ll undoubtedly serve as a core special-teamer for the Broncos.

“We know he is really talented, and we know the minute he walks in the door, he is going to be a hardcore special teamer,” Paton said. “[Special Teams Coordinator Tom] McMahon couldn’t be more excited.”

Landing Browning or Meinerz would likely have capped a successful Day 2 of Paton’s first draft. But to secure both players — while also earning an extra fifth-round pick — was somewhat of a coup.

As the third round came to a close Friday night, the Broncos’ trade back felt like a big step forward.

Where the Broncos’ roster stands after the 2021 NFL Draft

How does the Broncos’ trade for Teddy Bridgewater impact their plans for Round 1?