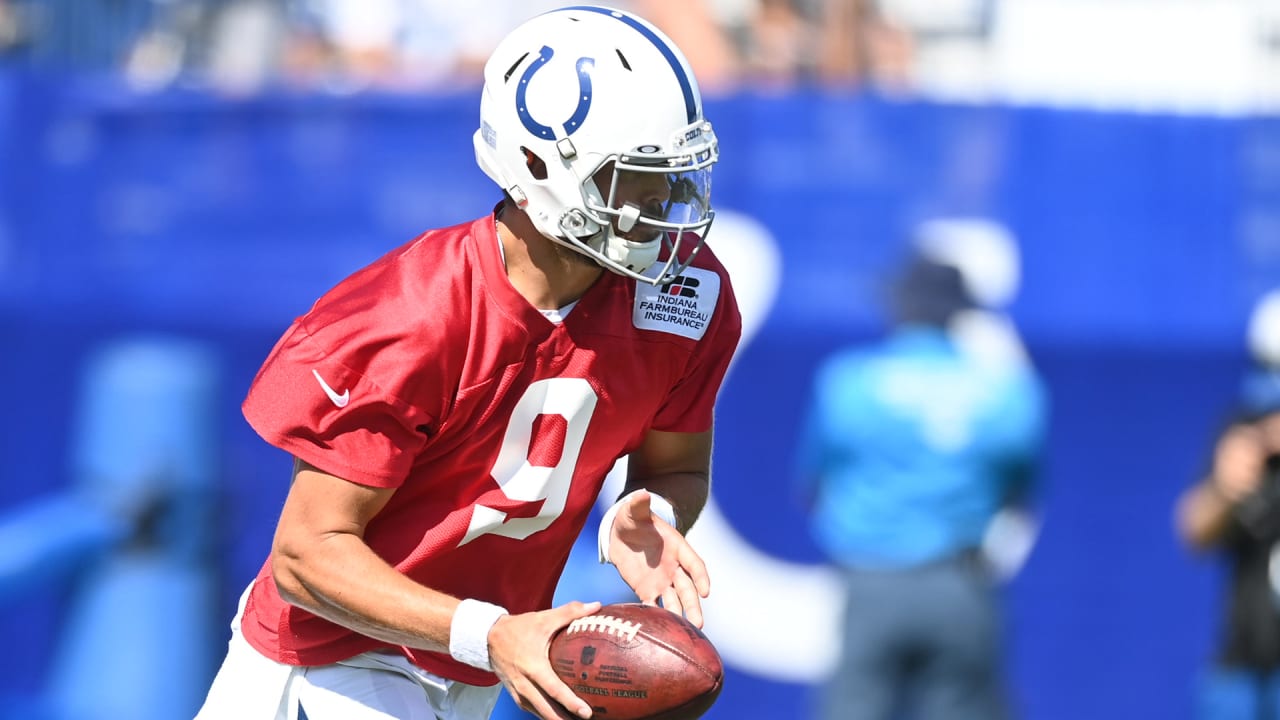 After some struggles on Tuesday, Eason and the Colts’ offense put in a strong morning of work Wednesday during the team’s second padded practice of training camp. Eason made some aggressive and confident throws, like when he used his arm strength to zip a pass into a tight window to wide receiver Zach Pascal over the middle during 11 on 11 work.

“Today, right from the start, very first period — I’m sure you guys could see it and feel it, and that was starting with Jacob,” Reich said.

Reich noted Wednesday’s practice was lighter on install, and the Colts’ offense began repeating plays that were installed earlier in camp. That helped with the offense’s better execution, as did Eason and the rest of the players having a generally good day.

And practices like the one Eason had Wednesday are part of the growing process for Eason as he builds a foundation of confidence ahead of his preseason debut Aug. 15 at Lucas Oil Stadium against the Carolina Panthers.

“Confidence is a big deal, and there’s only one way to get it and that’s execute,” Reich said. “Execute and stack play by play. The quarterback position’s tough, you’re dependent on a lot of other guys, so you can have a few things go wrong that sometimes aren’t your fault but it reflects on you. But that’s the job. You still gotta find ways to overcome that. Today was a good day for all the quarterbacks but Jacob in particular.”

Like the foot procedure quarterback Carson Wentz underwent 24 hours prior, the same procedure on left guard Quenton Nelson “went as well as can be expected,” Reich said.

“Same good report, in and out, everything else looks good,” Reich continued. “Talked to him this morning, was in good spirits. You all know Quenton’s got this intensity about him — I can assure you that after having the procedure that intensity didn’t change one bit. Just talking about how he’s going to approach the next few weeks to continue to get better every day. He’s not going to waste a day. He’s already given me his plan every day, so love his approach.”

Nelson took to Instagram to offer an update Wednesday morning, too, writing:

“3rd surgery of the offseason in the books, no time for pity. ** that. Truth is, I’m thankful, thankful the early part of the time table says 5 weeks. That gives me 5 weeks to do everything I can physically and mentally to be ready to go Week 1 to smash these goals.”

With Nelson (foot), center Ryan Kelly (elbow) and left tackle Eric Fisher (Achilles’) all out, the Colts are practicing without 60 percent of their projected starting offensive line. And yet, every day Jonathan Taylor still rips off an explosive run or two (or three) while Marlon Mack and Nyheim Hines pick up productive carries.

So while the Colts’ defensive line has been swarming over the last week, Reich said he’s happy with how the offensive line has responded to needing so many next men up. And the reps guys like Danny Pinter, Chris Reed and Sam Tevi are getting now should only help bolster the Colts’ depth later.

“I think the O-line, even without Eric, without Quenton, without Ryan, I’m not going to lie, I’ve been very impressed with the offensive line, without those guys in there,” Reich said. “I feel like we’re running the ball in camp, now that the pads are on I think there’s a lot of good things showing up. I feel really good about the depth that we’re building and I think some of these guys have proven they can play starting football for us if needed.”