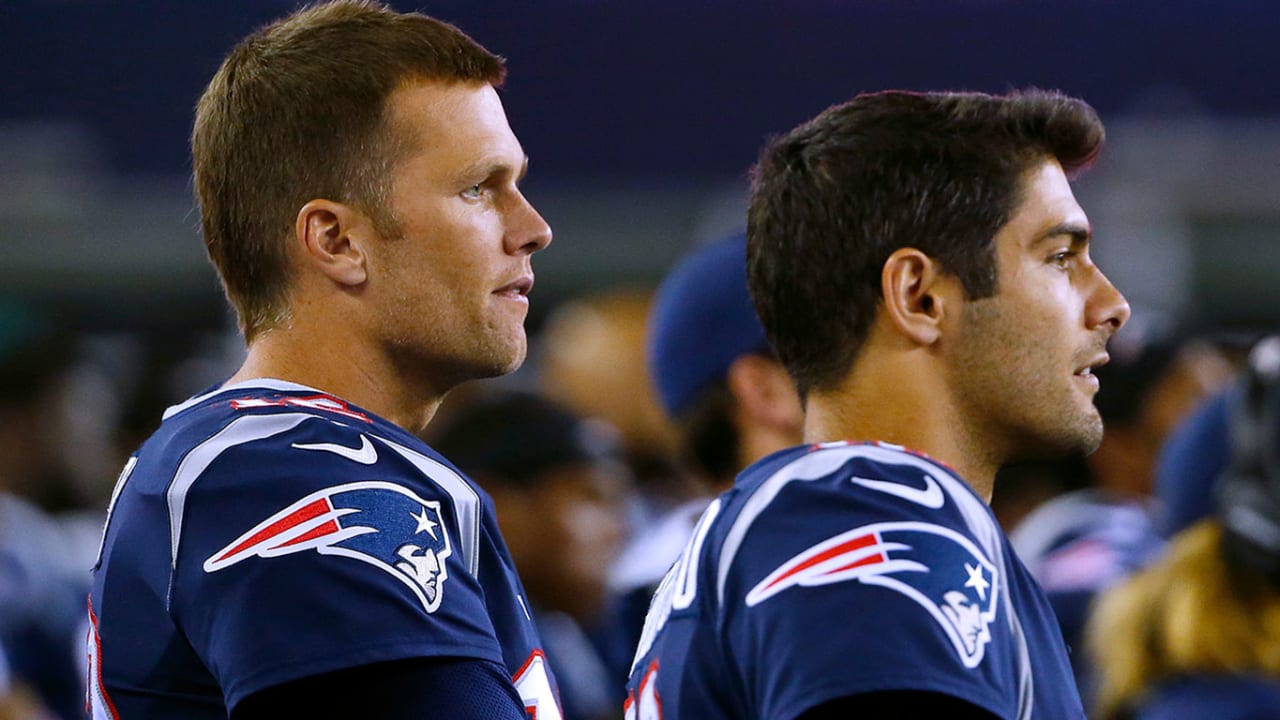 This isn’t a new situation for Jimmy Garoppolo﻿. In fact, he’s fairly familiar with a young quarterback being drafted as a franchise’s soon-to-be heir apparent.

The last time this scenario played out, Garoppolo was the kid with high potential drafted. His predecessor? Some guy named Tom Brady.

But there’s one glaring difference between Garoppolo’s previous situation and what the quarterback is currently dealing with: his former team didn’t unload a heap of capital in order to acquire a young signal caller of the future.

Garoppolo was drafted by the Patriots in the second round of the 2014 NFL Draft, the highest-drafted quarterback New England had selected since Drew Bledsoe was picked first-overall in 1993. All signs pointed to the Eastern Illinois product becoming the successor to the then-37-year-old three-time Super Bowl champion. Instead during Garoppolo’s rookie season, Brady led the Patriots to a 12-4 record en route to his fourth Super Bowl title, and the rest is pretty much history.

For San Francisco, the 49ers offered up a franchise-altering load of capital to move to the No. 3 overall pick in the draft. Back in March, the 49ers gave up two future first round picks as well as a 2022 third rounder to the Miami Dolphins in exchange for the opportunity to select Trey Lance﻿.

Garoppolo, who has remained in the background of the 49ers offseason noise, broke his silence on Thursday as he joined ESPN’s Keyshawn, JWill and Zubin podcast along with his father, Tony. Tony, a longtime electrician, joined the podcast to promote the virtual National Signing Day, an event for students who want careers and apprenticeships as a professional in the skilled trades – similar to National Signing Day events for high-school student athletes.

Like the students who will be studying from skilled professionals, Garoppolo is a product of learning from an experienced professional (Brady). He looks to use his prior experience in New England to help shape his relationship with the 49ers rookie QB.

“Me and my dad were actually talking about this the other day. It’s kind of coming full circle,” Garoppolo said on Tuesday. “You go through this NFL career and you start as the young guy coming in. Tom kind of showed me the ropes. The competition between us was awesome. (It) really made me grow as a rookie and a young player. Me and Trey will mold our relationship into that. But it will happen naturally. (It’s) just one of those things. You can’t force anything. Just let it come as it may.”

Garoppolo owns an impressive 22-8 record as San Francisco’s starter (24-9 including the postseason). Without the quarterback in the lineup, the 49ers sit at an uninspiring 7-26 record over the past three and a half seasons. His injury luck (or lack thereof) ultimately forced San Francisco’s hand at seeking insurance at the quarterback position. Garoppolo has missed 23 of the 49ers last 48 regular season games over the past three seasons due to various ailments.

Although the 49ers feel confident in their investment in Lance, San Francisco has remained steadfast on Garoppolo being in the team’s plans at least through the 2021 season. That message has been communicated in-house to the team, to the media, to Lance as well as Garoppolo, who had remained in contact with general manager John Lynch throughout the draft process. But Garoppolo understands the business and has been on both sides of this scenario. And regardless of experience, the quarterback understands he must earn his keep, regardless of who’s in the building.

“The chip (on his shoulder) will always be there. That hasn’t gone away at all. Since I got in the league, I’ve had that,” Garoppolo said. “I think it kind of comes from just the way you were raised. My dad was an electrician, a blue-collar guy. That kind of thing just rubs off on to you. It’s kind of the way the league’s going nowadays. Everyone’s drafting young (and) wants to get a developmental guy and things like that. I know what it is. I’ve been on both sides of it now. But at the end of the day, all you can really ask for is the opportunity. Once you get there, you’ve got to take advantage of it.”

But so far, dealings have gone well between the two quarterbacks. Garoppolo was the first teammate to reach out to Lance after the draft to welcome him to the team. Lance has emphasized his eagerness to learn from Garoppolo, a quarterback who is just 15 months removed from a Super Bowl appearance. Garoppolo has certainly benefitted, both on and off the field, from Brady’s leadership. Hopefully, Lance experiences a similar benefit whenever that time does come.

“I try to use my own personal experiences – just what I went through, what helped me, what challenged me as a young player,” Garoppolo added. “I’m going to try to use those tools that helped me and try to help Trey out. It’s hard to come into this league. I know how it was coming from an FCS school into the NFL, it’s a bit of an adjustment. It’s just different. So, whatever I can do to help him, I’ll be more than happy.”