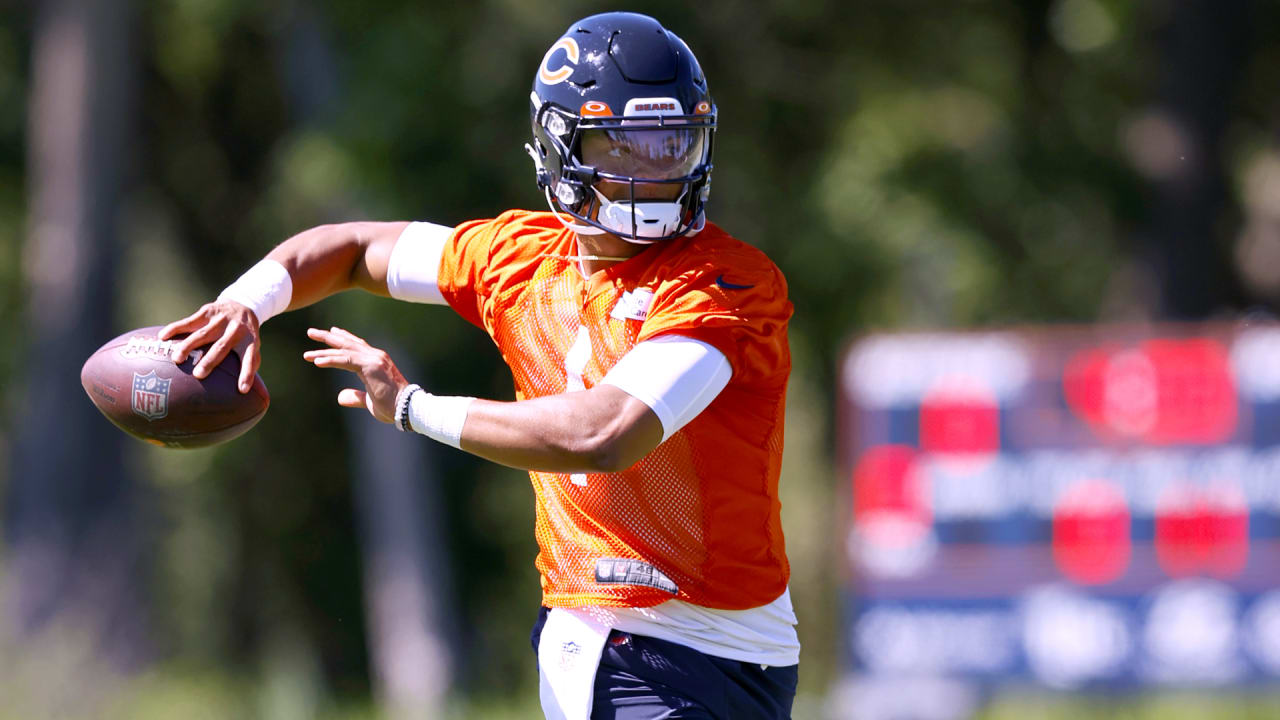 Although Fields was one of the most accomplished college players in the nation the past two years—he led Ohio State to a 20-2 record and back-to-back appearances in the College Football Playoff—he rarely if ever called plays in a huddle.

“That’s probably the biggest step up because at Ohio State we pretty much went no-huddle like 90, 95 percent of the time,” Fields said.

Nagy has no doubt that the promising young quarterback will spend the time leading up to training camp honing his game. It’s a process that includes not only calling plays but studying his playbook and working on refining his fundamentals, mechanics and footwork.

“I know what Justin would say is there’ll be zero getting away from football,” Nagy said. “This kid is completely locked in and he is going to be. There’s literally going to be football going on every day in some way, shape or form.”

Fields told reporters that he plans on learning the nuances of the offense during his time off.

“Right now, I have a base idea of what plays we have, so just diving into that more and just focusing on the small details,” Fields said. “When you have a big base, you can really start detailing each and every specific thing in a play and really get to know a play like the back of your hand. That’s what I’m going to be doing.”

Fields benefitted greatly from participating in offseason practices at Halas Hall the past three weeks—something that last year’s rookies were unable to take advantage of due to COVID-19. The Bears held a rookie minicamp in May before adding veterans into the mix in early June for OTAs and this week’s minicamp.

“These last few weeks have been a big help for me just to get around the veteran guys, learn from them, learn from guys like Andy [Dalton], guys like Nick [Foles],” Fields said. “The more reps in practice that I have, the more I’ll grow. These last few weeks have been great, and I’ve definitely learned a lot and I think I’ve definitely progressed each and every day.”

Part of that progress has involved developing a rapport with his new teammates, especially those responsible for catching passes.

“It’s been great,” Fields said. “All of those guys are weapons on offense and very talented. [We’re] just kind of getting that timing down with routes on air and doing that stuff. That’s really big in terms of seeing their body language, seeing the way they run each and every route.”

Fields has already created a bond with Dalton, an 11-year NFL veteran who signed with the Bears as a free agent in March.

“He’s talked to me a lot,” Fields said. “I actually went to dinner with him and his wife, so we talked a lot there. Andy has completely taken me under his wing. Any question that I have for him, he’s going to answer, even when I’m throwing. There was one day after OTAs, I was throwing extra after practice and he stayed out there specifically to see maybe what I was doing wrong. He was just trying to help me out.”

The Bears have made it clear that Fields will begin his NFL career as their No. 2 quarterback behind Dalton. But the former Ohio State star isn’t concerned about where his name is listed on the depth chart.

The Bears love that mentality—along with the pride that Fields takes in learning from his mistakes. Although the rookie quarterback consistently threw pinpoint passes in minicamp practices this week, he also spent time dissecting a red-zone throw he made that was intercepted by linebacker ﻿Christian Jones﻿.

“We went through the progression of what you see post-snap and why you don’t throw it to that spot, and he gave me a great answer as to why he went there,” Nagy said. “So now we as coaches … can correct him. And now the next time that play’s called, I’m going to guarantee you that he won’t make the same mistake, and now you’ve got a chance to make a touchdown instead of an interception.”

“Me personally, I tend not to make a mistake more than one time,” Fields said. “So once I’ve made that mistake, I learn from that mistake and there’s a 99.9 percent [chance] that that same mistake will not happen again.”