ENGLEWOOD, Colo. — It might be the only update given more often than traffic and weather these days in metro Denver: The NFL draft is three weeks away and the Denver Broncos still haven’t made a move at quarterback.

They haven’t swung a deal — as the San Francisco 49ers did — to move into the draft’s top three picks so they could secure one of this draft’s best QBs. They haven’t splurged in free agency to reel in a veteran passer who can potentially re-set the plan for the moment. They have — as they did at the end of the season — Drew Lock at the top of an unchanged depth chart.

That doesn’t mean in the often wild hours just before the draft opens April 29 the Broncos can’t, or won’t, make a move. But at the moment they sit with the No. 9 pick and general manager George Paton’s pronouncements last month that “we’re not going to force it” and that “fortunately we have a quarterback.”

What about quarterbacks later in the draft? Are any good enough to push Lock in the immediate future? What about other positions that could intrigue the Broncos early on? What about the players who opted out in 2020? Where might some of them fit with the Broncos in 2021?

Riding shotgun with Mel Kiper Jr., let’s get to those.

What Kiper says: “[Trask] has got a nice arm, his touch on the deep ball is outstanding, his accuracy on the deep ball, really good. His mobility will put an awful lot of pressure on your offensive line — lack of mobility. … [Mills] is an interesting kid, so highly rated coming out of high school when he went to Stanford. … I saw [Stanford coach] David Shaw coming out of the draft after [Mills’] first or second year and … I said, ‘What’s your opinion of Davis and he said, ‘Oh he’s going to be good, he’s going to be really good.’ … Is he elite? No. But he’s got talent, he had a great pro day. I think of all the guys beyond the big 5, Davis Mills will probably be the next quarterback taken.”

The way I see it: Mills is the projection player beyond the first-tier quarterbacks. Plenty of evaluators in the league say Mills has grown on them in recent months. He’s 6-foot-3, 217 pounds and has an effortless release.

For many he is considered the best prospect among the “other” quarterbacks after Trevor Lawrence, Justin Fields, Trey Lance, Zach Wilson and Mac Jones. Some in the league say they like him far more than they do Trask. Mills played in 14 career games during three seasons with just 18 touchdowns in 438 career attempts — or one every 24.3 attempts.

Some coaches are intrigued with Mond’s arm strength. Newman never played a down at Georgia because he opted out after his transfer from Wake Forest, so teams have dived into his 2019 season when he threw 11 of his 26 touchdowns against Utah State, Rice and Elon and had four games when he completed fewer than 47% of his passes.

For the Broncos, Mills might be the most “ready” of the quarterbacks after the top tier. He has a combination of athleticism, size and arm strength and is savvy in the pocket, but he will need a bit of a ramp-up to get his career going.

What Kiper says: “The pass-rushers are all a little flawed, there’s nothing perfect about any of them. … [Paye] is the safe defensive/end pass-rusher, [Phillips] might be the best pass-rusher in the group, but he’s had some injuries and a player like Rousseau … I thought some of his sacks were hold-the-ball sacks. I actually liked him better when he lined up on the inside. … Ojulari, he could be a late first-rounder, needs a secondary move, but an athletic player.” 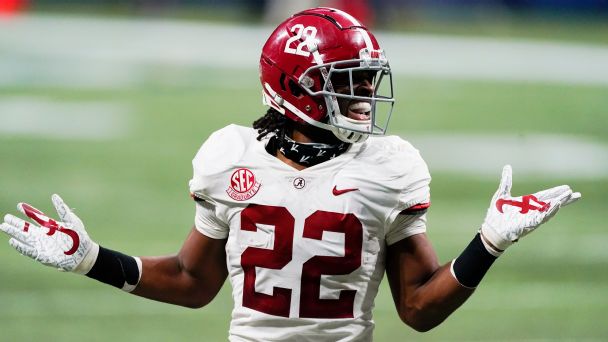 • Dolphins’ options at No. 18: Harris or wait?
• Vikings in search of Cousins’ successor
• Will Cotls draft a LT or pass-rusher?
• Bills’ draft strategy: Safe or swing for fences
• WR comps: Smith and Harrison, more

The way I see it: The Broncos don’t specifically need a pass-rusher, but Von Miller is in the final year of his deal and they must also make a decision on the fifth-year option for Bradley Chubb, for the 2022 season, by May 3.

With the quarterback frenzy expected at the top of the board, several of the draft’s best defensive players could be available at No. 9, including all of the best pass-rushers. Paye has the potential/high effort combination that can provide a significant developmental jump for a player with 11.5 career sacks with the Wolverines. And if Phillips had not suffered multiple concussions earlier in his college career as well as injuries from a moped accident, there would be plenty of people saying he would be a top six or top seven player on this board.

The way I see it: For the Broncos they could be looking at a group of players that includes Rousseau, Parsons and Farley at the No. 9 spot, just among the players who opted out in 2020 alone. Parson has had some off-the-field issues he has tried to address with teams, including that he fought with a teammate over hazing incidents.

Farley has some injury concerns, including a recent back surgery teams are trying to evaluate. Farley was also a wide receiver for much of his football life, so his developmental potential is getting a long look given he is already considered one of the best cornerbacks on the board despite his lack of experience at the position.