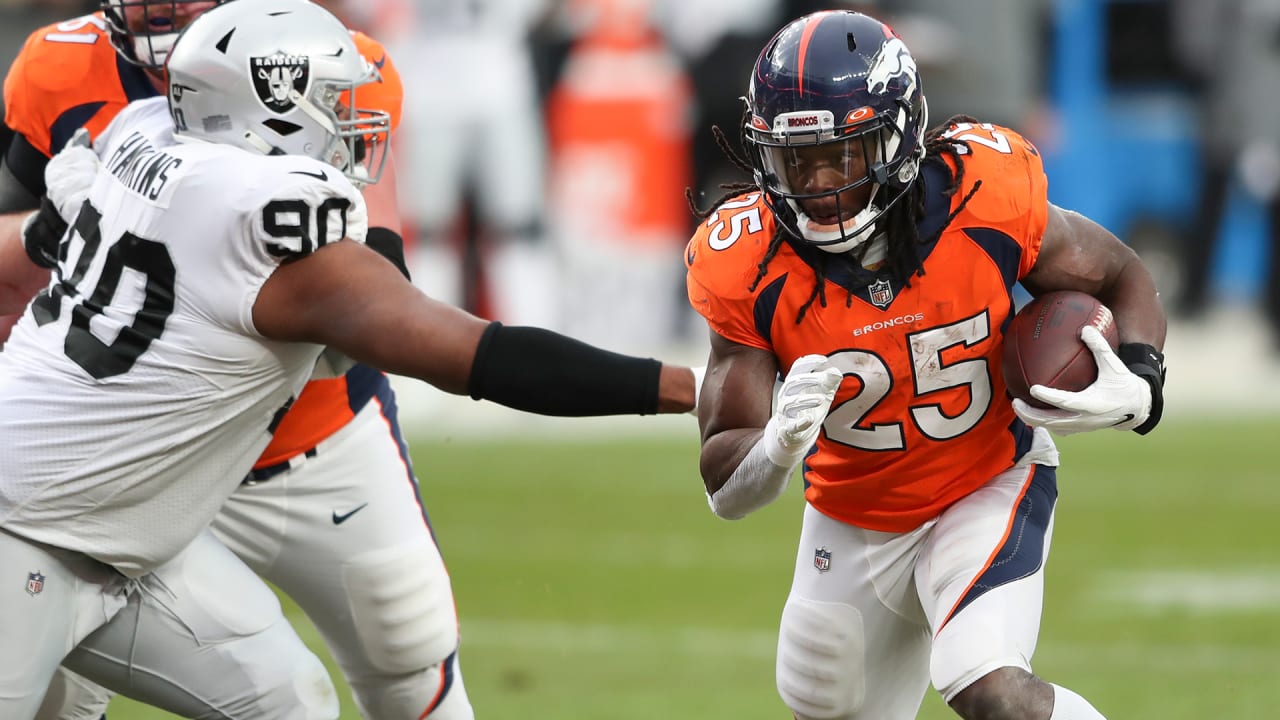 ENGLEWOOD, Colo. — As the 2020 season went on, Melvin Gordon III got stronger.

Through the first 11 weeks of the season, the Broncos’ starting running back topped the 60-yard rushing mark on five occasions. In the final five weeks of the year, he broke that mark each week.

Gordon, who signed with the Broncos in free agency in 2020, posted a season-high 131 rushing yards on just 15 carries in a near-upset of the eventual AFC Champion Chiefs in Week 13, and he added three touchdowns over the final three weeks of the season.

In essence, Gordon showed why the Broncos brought the former 15th-overall pick to Denver. His bruising running style became more effective late in the season, and he gave Denver a strong complement to a receiving corps that featured former first-round picks Jerry Jeudy and Noah Fant. He finished the season with nine touchdown runs and nearly 1,000 yards on the second-best yards-per-carry average of his career.

As Gordon enters Year 2 with the Broncos, he’s determined to begin the season the same way he ended the last and prove to the team that he deserves to remain in Denver beyond the 2021 season when his contract expires.

“I don’t want people to feel like, ‘He’s lost a step. He’s this or that,'” Gordon told DenverBroncos.com this week. “I almost went for 1,000 yards last year while sharing the ball. … It’s important to not only show people, but also show myself, that I’m still this high-caliber back.”

Gordon’s goals for the upcoming season including being named to his third Pro Bowl, earning an All-Pro nod and making the second playoff appearance of his career. Gordon should have plenty of opportunities to display his talent, as he believes he can continue to be a three-down option for Denver as he enters his seventh season.

“I love it,” said Gordon of being a three-down player. “It’s just what I do and what I pride myself on. I try to be an all-around back, a back that can go in on all downs. It’s something that’s big with me. You see a lot of guys doing it, and it’s just a competition not only within our running back room but within the league. You just want to be able to do it all. That’s just what it is. That’s my mindset — to go out there and try to be an all-around back. I don’t like coming off the field if I don’t have to.”

The Broncos do figure to maintain some sort of rotation, as they signed Mike Boone in free agency and selected Javonte Williams in the second round of the 2021 NFL Draft. Head Coach Vic Fangio said during the draft that “you need two or three backs in this league to have success,” and both Boone and Williams should have a role in 2021.

“Obviously they bring in competition every year and every position,” Gordon said. “You can look at things in two different fashions. With the Javonte situation — you bring in a back in the second round, my contract is about to be up — so you could look at it as, they brought him here to replace me. Or you can just look at it as, it’s just another way for me to get better. Another guy to push me to greater heights and see what I can do, see what I can bring and bring it out of me. … NFL teams, GMs, head coaches — their jobs are to continue to bring in talent to keep competition at an all-time high. You can be down about that, or you can show people, this is why I’m the guy. I’ve been competing my whole career.”

Gordon said he hopes that despite the added competition, Denver can be the place where he continues to compete for the foreseeable future.

“I really feel like this is the year to do what I need to do, because I want to make Denver home,” Gordon said. “I don’t want to be a journeyman. I keep saying that. I want to really make Denver home. I love the city. I love the guys there. It’s just a great atmosphere. I think with the fans, it’ll make me feel even more at home. I’m not going to let no one deter me from what I want and take me from what I want. My mindset right now is to make that my home for a while.”

Yet while Gordon plans to elevate his game, he said he’ll be a resource to Williams, who said he’s “always been a fan” of Gordon’s since his days at Wisconsin.

“It’s dope in the sense that you have younger players that look up to you,” Gordon said. “It’s kind of weird, in a sense. That shows how fast time flies, because I feel like I just got in the league, to be honest. It’s dope, though. He wore 25 — I’m sure it wasn’t because of me — but it’s just crazy, man. To hear him say that and speak highly — man, it’s dope. When you hear stuff like that, it makes you want to help a guy get better. He looks like he wants to be a sponge and he wants to learn and he wants to get better. Who am I to not help him try to eat? I’m definitely going to be working and trying to stay the top dog, but who am I to not help a guy try to feed his family?”

Gordon knows the competition extends beyond the running back position. He pointed to battles at the center spot, wide receiving group and, of course, the quarterback position. Gordon attributed these developments to General Manager George Paton’s roster-wide commitment to add competition.

“He’s trying to get some dogs,” Gordon said of Paton. “I feel like he’s trying to see who can step up to the table. Who’s going to compete? Who’s really going to take that next step forward?”

With those new additions and the return of several key pieces — including Courtland Sutton and Von Miller — Gordon believes the Broncos are closer to competing for a playoff berth than most national analysts believe.

“Obviously to the world, we aren’t seen as such,” Gordon said. “We don’t have any prime-time games [beyond one Thursday night game]. It’s not my first rodeo as a dark horse, which is cool. Sometimes that’s better. … It’s been when you explode on the scene. We know what we have. We know what we’re capable of. I’m excited. We’re a lot closer than people expect us to be. We’re still a young team, but I think we have enough experience and we went through a lot last year to really mature us up a lot faster than we wanted.

“… Everyone knows the Denver Broncos, and it’s about time we put our names back on the map.”