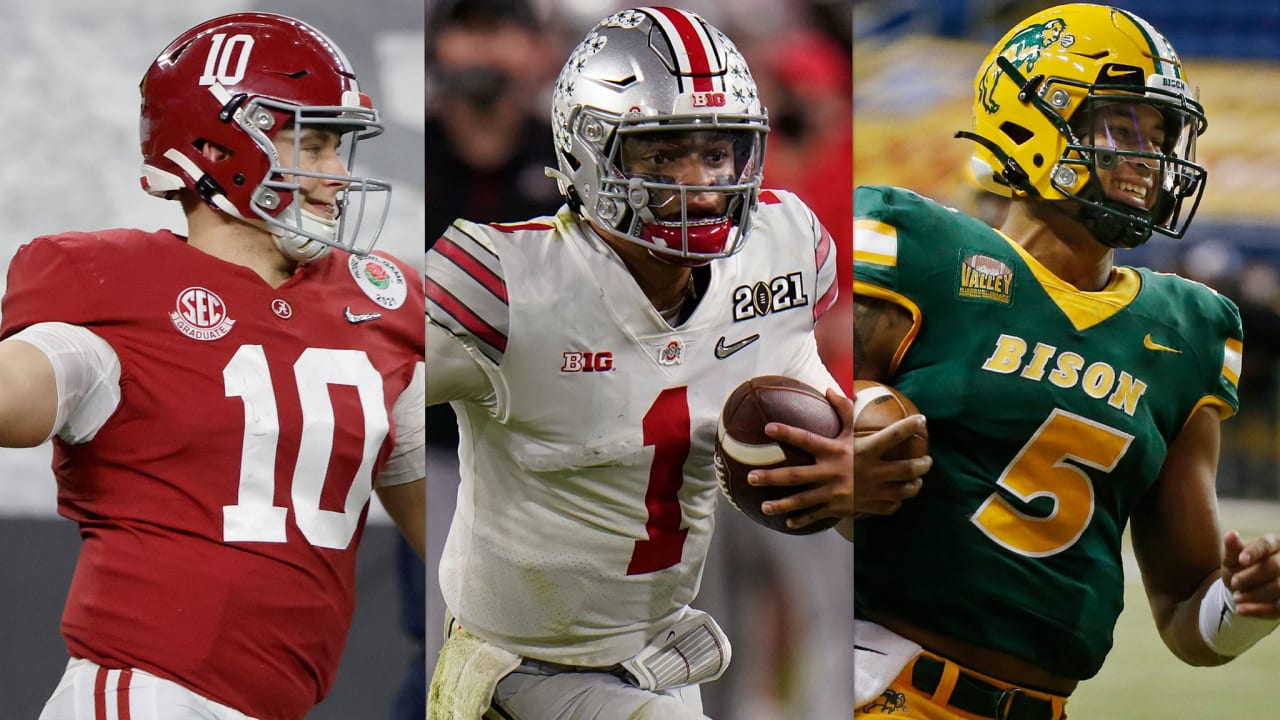 “I don’t think Mac Jones fits all 32 teams. I don’t think he fits all the teams that are in the quarterback market. But I understand why the 49ers value what he does because this is really an opportunity for San Francisco to duplicate what Mac Jones had at Alabama which is you have a really good offensive line, you’ve got guys that can win one-on-one matchups all over the field and you’ve got a very creative play caller that’s going to find those matchups and then rely on an accurate, efficient quarterback to function in that system. Well, that’s not every other team that have all those things in place so they’re not going to value Mac the way Kyle Shanahan and John Lynch might value him.

“This is what I think is gonna happen. It looks like it points towards Mac Jones, but if I was there knowing how much they value the things that Mac is good at, I would still take Trey Lance because I think Trey’s going to eventually get to the point where he can deliver all the things that Mac can deliver, in terms of being able to process very quickly, make great decisions and you’re going to be able to do more with him, in terms of getting him on the move. But right now, accuracy wise, he trails Mac Jones.”

“I believe it should come down to two quarterbacks. The two quarterbacks should be Justin Fields and Trey Lance. I can make the case for Justin Fields because he played at a bigger school (and) played against big time competition. He has all of those tools to be a five-star playmaker in that system. That said, when I looked at Trey Lance last year, in my notes, I wrote down Jimmy G and how Trey Lance would be perfect for the San Francisco 49ers system because of the multiplicity of what they did at North Dakota State. Under center, in shotgun and quarterback run game, traditional drawback passes with a mix and play action – Trey Lance did all this stuff on tape. So, in my mind, I think both guys would work. For whatever reason, I have a feeling that maybe Trey Lance will be the guy, but I wouldn’t bank on it. I would just say that I see those two guys as being a 49er more than I see Mac Jones just because of the extra stuff that they bring to the table with all those weapons (the 49ers have).”

“I would say if you want to go with the dual-threat, you take Justin Fields or Trey Lance. If you want the pocket guy who is incredibly smart and can maneuver in the pocket extremely well, accurate to every level and off the charts intelligence, it would be Mac Jones. So, that’s why it was trending to Mac. It’s because the smarts and accuracy tip the scales to Mac Jones.”

“I think Mac Jones would be, on paper, a great fit in that system. I think the one thing that blew me away about Mac Jones, and that’s looking at him and all the quarterbacks this year, is his ability coming out of Steve Sarkisian’s offense. Sark was in Atlanta with Matt Ryan running it as a coordinator. But to watch Mac Jones process information and how quickly he thinks and how quickly the ball gets out, there’s a lot to like about that part of his game.

“But we’re trying to get into the brain of Kyle Shanahan. You know he’s had guys like Mac Jones in the past. But then you could look at Justin Fields and say ‘oh my gosh, how do you pass on 6-foot-3, 224 (pounds and) runs a 4.4.? Really accurate passer. Really consistent with his decisions throughout most of his career. How do you pass up on what he could potentially do in the NFL?’ It’s a guessing game. But at the end of the day, the guys that make it, they go to the right fit, the right system, and they’re lucky enough to play for a Sean Payton. They’re lucky enough to play for an Andy Reid.

“We would never know who Joe Montana was if he didn’t play for Bill Walsh and play in a West Coast offense for the 49ers. And I don’t think having talented players around you should be a knock on you at all. He ran an offense that (Miami Dolphins quarterback) Tua (Tagovailoa) ran the year before, but they ran a very different offense if you compare. A lot of that had to do with Mac Jones’ ability to think quickly and get the ball out fast, and that to me should be celebrated, not questioned because of what he did.”

“In the past on our show NFL Live, I said I think Mac Jones makes sense for San Francisco (when) we were talking about who the team might take at 12. But looking at the amount of draft capital given up at the position, I was a little bit taken aback by the notion of the player going there. It doesn’t mean that he wouldn’t be successful – I’m sure he would be, frankly, in Kyle Shanahan’s offense. But I didn’t have him as a quarterback going in that position in this draft class. The reality is, all of these quarterbacks would be good with Kyle Shanahan.

“I am a big fan of Justin Fields’ game and I thought it was possible he might go third overall with some of what we’re hearing around the league. And I think he’d be a really nice fit for Kyle, given his accuracy, his athleticism – which we haven’t seen that many dual-threat quarterbacks in his offense, but I think his ability to create would take that to another level. So, if I was a San Francisco fan, I think I’d be rooting for that pick, personally. Heck, I love Trey Lance, too. He’s incredible. And if you were to have a year to learn, I think that would be a really nice fit for him.”

“I like Justin Fields. I think he’s improved since he came out of high school, since he went to Georgia and Ohio State. And I think he’s going to get better. And I know people are finding flaws with him, they’re looking for them. I don’t think he’s a run-first guy just because he runs into the 4.4’s. He has all that escape-ability, athleticism, he’s built strong. I think he can take a hit.

“I like the fact that he played two years at Ohio State at a really high level against a lot of really good competition – a lot of playoff games. I’m a Justin Fields fan. It may go against the grain right now for what a lot of us are hearing, but that’d be my pick. That’s who I would go after.”

“Zach Wilson was the first one and then second is Justin Fields for me. We hear a lot of Mac Jones rumors, but in terms of the math and based on all of the signals that we know, it’s Kyle Shanahan. It’s not necessarily one-for-one. But given all of the clues and indications that we have from everything that is known, that’s why Justin Fields would work a little bit better. His resume shows really great rushing metrics – an actual rushing quarterback, not a scrambling quarterback. A guy who can get you those first downs on his feet. So, that was why he maps a little higher than Mac Jones.”