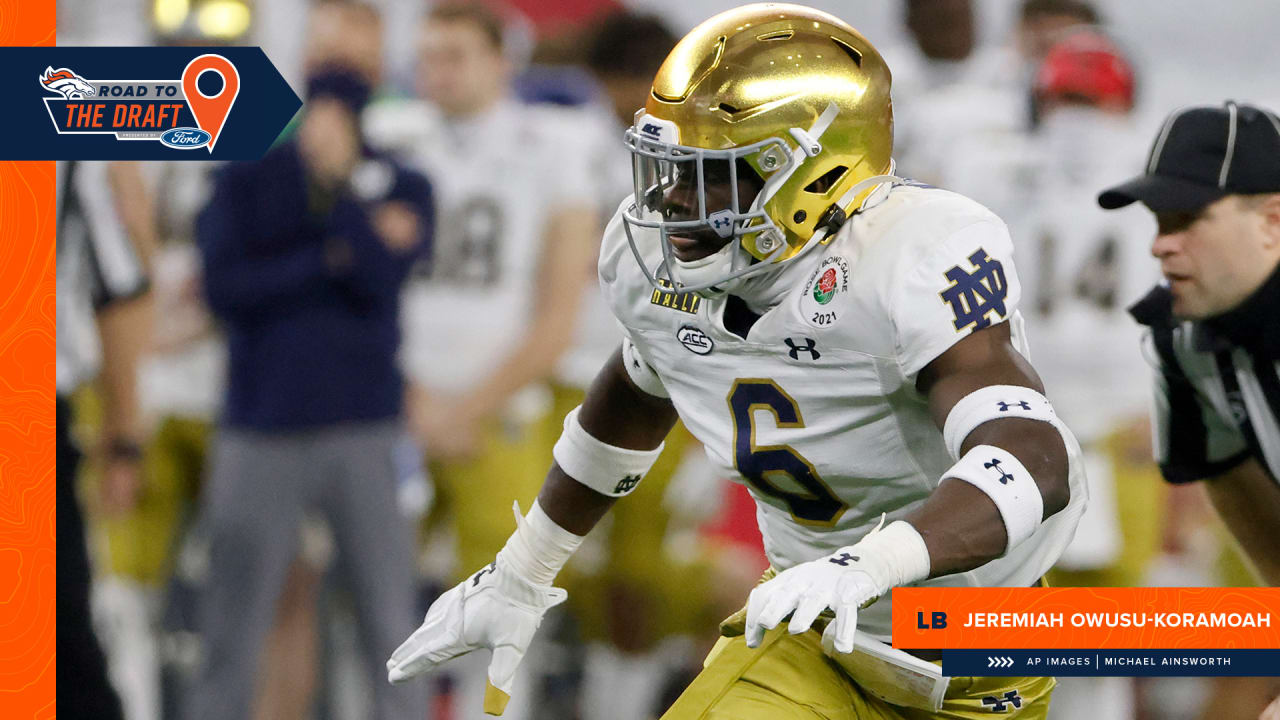 A year after Clemson’s Isaiah Simmons dominated draft conversations for his potential as a hybrid defensive player, another potential Swiss Army knife is poised to enter the league.

Notre Dame’s Jeremiah Owusu-Koramoah is the latest in a lineage of defensive players who have adapted to the modern game, which places a stronger emphasis on pass coverage.

While at Notre Dame, Owusu-Koramoah played all over the field, as he served as a linebacker, a slot cornerback and a box safety.

On Wednesday, he worked out at Notre Dame’s pro day to prove to team’s that he is worthy of a team’s first selection — and that he can make a significant impact at the next level. He posted a 36.5-inch vertical jump and a 10-foot-4-inch broad jump, but he did not run the 40-yard dash.

At Penn State, Paton got a first-hand look at Micah Parsons, who is widely considered the top prospect at inside linebacker. Owusu-Koramoah, though, may not be far behind. NFL Network’s Daniel Jeremiah has Owusu-Koramoah as his 18th-ranked prospect, while Parson slots in at No. 11.

Jeremiah praised Owusu-Koramoah’s coverage abilities in both man and zone, and he noted the linebacker’s ability to use his speed to rush the passer and stop the run. Owusu-Koramoah’s biggest weakness, Jeremiah wrote, is his inconsistency as a tackler in space.

Whichever team drafts Owusu-Koramoah may find that its toughest task is where to play the 6-foot-1, 221-pound player. The Cardinals struggled for part of the season to find the right spot for Simmons, the eight-overall pick in 2020. Simmons did eventually increase his tackle numbers late in the season and record a crucial interception in a mid-season win over Seattle.

Owusu-Koramoah said on Monday that NFL teams agree with Jeremiah’s assessment of his strong fit for today’s NFL, as several teams have spoken to him about playing a number of different roles in their sub-packages.

“That kind of duality I think is what NFL teams are looking for as the league progresses into more of a pass league.”

A two-year starter at Notre Dame, Owusu-Koramoah tallied 142 tackles, 24.5 tackles for loss, seven sacks, an interception, seven passes defensed, five forced fumbles, four fumble recoveries and a fumble return for a touchdown in 25 games for the Irish. He was named the ACC Defensive Player of the Year, a consensus All-American and the Dick Butkus Award winner as the nation’s top linebacker following the 2020 season.

Owusu-Koramoah said his experience playing man coverage last season for the Irish should pay dividends, as he said many NFL teams are now in sub-package formations — which includes an extra defensive back or off-ball linebacker — on 70-to-80 percent of their snaps.

In the team’s base formation, though, Owusu-Koramoah believes he will still play linebacker rather than serve as a full-time safety or slot cornerback.

If Owusu-Koramoah ends up in Denver, he would represent an infusion of talent to a linebacking corps that already contains two solidified starters in Alexander Johnson and Josey Jewell. Both players are currently slated to be unrestricted free agents after the 2021 season, though, which may lead the team to add a young player like Owusu-Koramoah to the group.

Denver has long looked for an answer to stop Chiefs tight end Travis Kelce, who is a perennial Pro Bowler. Las Vegas’ Darren Waller also poses a strong threat within the division.

Wherever he ends up, Owusu-Koramoah believes he will bring both talent and an unmatched mentality.

“My skill set is a mindset,” Owusu-Koramoah said. “I think when I step on the field, my attitude kind of differs from others. Just willing to attack, willing to be physical, willing to take change, willing to make plays — a fierce competitor. … In terms of the offense, in terms of their skills and their speed, I think I just match up just as well. I run fast, I’m physical and I’m quick-reacting — but not too quick that I can’t be patient to wait for a play to develop in front of my eyes.”

Owusu-Koramoah was far from the only prospect on display at Notre Dame’s pro day, as offensive linemen Liam Eichenberg and Aaron Banks and tight end Tommy Tremble were also among the intriguing prospects who worked out for scouts.