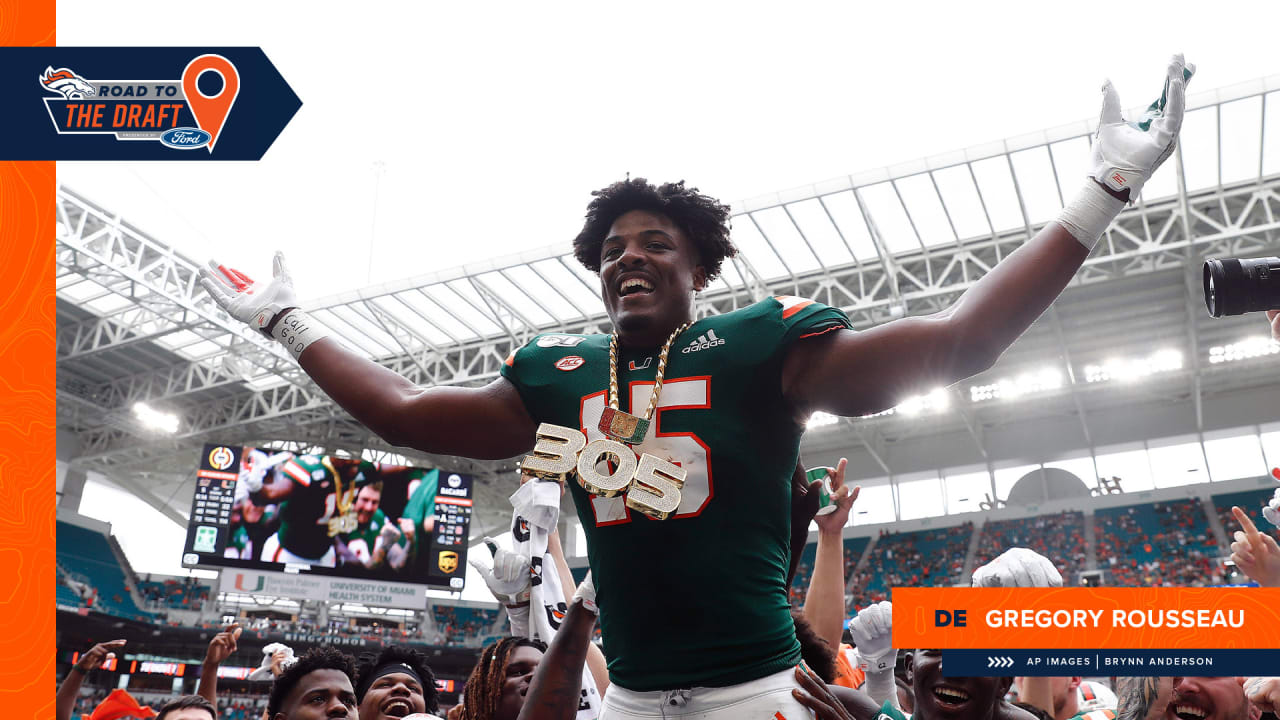 When the 2021 NFL Draft begins next month, two players from the University of Miami will have a chance to make history.

Gregory Rousseau and Jaelan Phillips, a pair of Miami’s top prospects, could become the first defensive ends from the same school to both be selected in the first round since NC State had a pair of ends selected in 2006.

Both could be intriguing prospects despite having different paths to this moment.

Rousseau, NFL Network’s Daniel Jeremiah’s 13th-ranked prospect, was a first-team All-ACC performer in 2019. His 15.5 sacks ranked behind only 2020 second-overall pick Chase Young at the FBS level. During that season, Rousseau recorded at least one sack in nine different games and had three- and four-sack performances against Pittsburgh and Florida State, respectively.

That film, though, is all that teams have to go on as they evaluate the intriguing rusher. He played in just two games in 2018 as a reserve player before he suffered a season-ending ankle injury, and he opted out of the 2020 season due to COVID-19 concerns. His mother works with COVID patients as a nurse, while his brother has asthma, which can put individuals at higher risk for COVID-19.

“My focal point was to get with better everything from my get-off to my hands, my explosiveness … so I can just be at my best when I get to whatever team picks me up,” Rousseau said of his time away from the field.

In his evaluation, Jeremiah noted concerns about Rousseau’s lack of an “elite get-off as a pass rusher,” but he said the Hurricane has the length and instincts to pressure the quarterback.

“Rousseau is still developing, but he has found a way to post elite production while learning on the job,” Jeremiah wrote. “His best football is ahead of him.”

Rosseau’s on-field performance Monday may not help his draft stock. The 6-foot-6, 266-pound player posted a 30-inch vertical jump, which ranks in the 16th percentile among defensive ends since 2000. His 9-foot-7-inch broad jump puts him at the 52nd percentile, and he record a 4.68-second 40-yard dash.

Phillips ranks lower on Jeremiah’s board as the 22nd-overall prospect, but he has the strong 2020 season showing that Rousseau lacks. Phillips earned second-team All-ACC and All-American honors last season after he led Miami with eight sacks and 15.5 tackles for loss. He started 10 games for the Hurricanes and also notched 45 total tackles, an interception, three pass breakups and five quarterback hits.

His success in Coral Gables was somewhat surprising, given a difficult start to his career. Phillips began his career at UCLA, where he recorded 3.5 sacks and seven tackles for loss as a true freshman in just seven games. Phillips, though, suffered an ankle injury that year and played just four games in 2018 as he suffered three concussions. UCLA’s doctors did not clear him to play, and he retired from football. In 2019, though, Phillips transferred to Miami to resume his career. After sitting out that season due to transfer regulations, he returned to the field in 2020 to post his breakout season.

The 6-foot-5, 260-pound player could be another intriguing option if teams are able to reckon with his medical history.

“There is some concern about Phillips’ durability based on his injury history during his UCLA career (he transferred to Miami in 2019), but he has as much talent as any pass rusher in this draft class,” Jeremiah wrote.

“I think I’m the number one defensive end and I think my performance today definitely solidified my rankings in a lot of people’s eyes,” Phillips said. “I still think I could have done better. So I’m always hungry to be better. I strive for excellence.”

Whether the Broncos will consider an edge rusher with the ninth pick remains to be seen. Von Miller remains under contract through 2021, and the team can pick up Bradley Chubb’s fifth-year option, which could keep him with the team through at least 2022.

The potential of this Coral Gables duo, though, may be too hard to pass up.

Tags: he his rousseau

DenverBroncos.com predicts the first three rounds of the 2021 NFL Draft