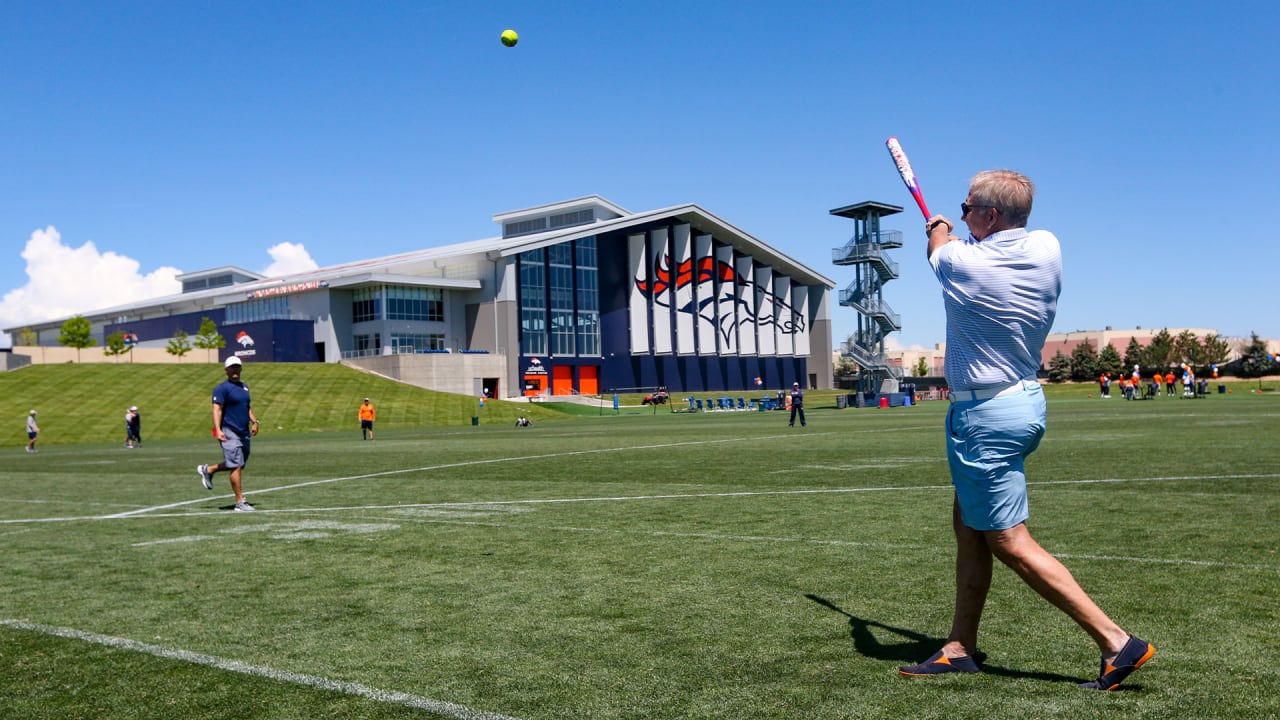 This is the time of year in the NFL calendar when every story seems to relate to the draft and team building.

But it is also the start of the baseball season, and I thought it might be fun to take a moment away from the crush of draft preparation and combine the Broncos with our national pastime.

Naturally, most pro football players have concentrated on that sport, certainly America’s favorite, but there are a number of Broncos with baseball in their backgrounds, too.

Just for the fun of it, I have picked out nine Broncos and have created a starting lineup batting order. These are not the only Broncos who have affiliations with baseball but just nine that I chose.

Leading off is Wade Manning, who was a receiver/defensive back/return specialist here during the early Dan Reeves era. Wade had great speed and is one of the best all-around athletes ever to play for the Broncos. Manning played both football and baseball at Ohio State and was a great player who certainly could have chosen baseball over football, but quoting Wade, “You sign in baseball and you have to work your way through the minors. In football, you make it or you don’t. You know right away.”

Wade chose football, played for the Cowboys and Broncos, and then had a long career in the public school system in the Denver area.

Batting second is Rick Leach. Who the heck is he, you may rightly say. Leach was a star quarterback and outfielder at Michigan who told our quarterback coach Babe Parilli that his first choice was football. So we drafted Leach in the fifth round of the 1979 draft.

When he came to Denver, I drove him all around to television stations for guest appearances, and he reiterated to me that he definitely would sign with the Broncos, “unless I get drafted by the Detroit Tigers.”

You guessed it. Detroit drafted him, signed him, and he had a long career as a big league outfielder. I never got my gas money back.

Batting third on my fictional team is Carroll Hardy.

Perhaps the greatest athlete ever to play at the University of Colorado (sorry, Dave Logan and Byron “Whizzer” White), Hardy was a great running back at CU who teamed with Frank Bernardi to create “Hardy and Bernardi” for the Buffs. Carroll received the “Outstanding Player Award” in the 1955 Hula Bowl, played for the San Francisco 49ers (for whom he averaged 28.2 yards per catch, which was the best single-season average by a 49ers player that decade. Yes, that is correct) and in baseball was the only player ever to pinch hit for Ted Williams (very well known) and for Roger Maris (known by very few).

Near the end of his baseball career, he began a 20-year career with the Denver Broncos while playing outfield for the Denver Bears.

Hardy eventually became our assistant general manager and just about everyone thought he would be the GM of the Broncos, but he got caught in the dust of Edgar Kaiser Jr.’s team purchase and it just never happened for Carroll. As classy a man as I have met in my 50-year career, he played a vital role in assembling the talent that became the Orange Crush defense and took Denver to its first Super Bowl.

Batting fourth, cleanup, who else?

The greatest two-sport athlete ever in Broncos history, John Elway.

Entire books have been written about the greatness of Elway, but little remembered is that he not only played at Stanford but was the New York Yankees’ first choice in the 1981 draft.

John signed with the Yankees and played one season for the Oneonta Yankees in the New York-Penn League, where he hit over .300.

A little known fact about John Elway: he lost his scholarship at Stanford when he signed with the Yankees and is almost certainly the most famous Hall of Fame player who had to pay his own tuition for his last two years at Stanford. “Actually, [Yankees owner] Mr. [George] Steinbrenner paid it for me,” John recalled.

In a class and league by himself. John wore two uniforms for Oneonta, number 8 at home (“I got to be Yogi Berra,” he told me), and 51 on the road. Since the Yankees also retired 51 for outfielder Bernie Williams, Elway has the distinction of having worn three numbers professionally, all retired by their respective organizations!

Batting fifth in my lineup is John Lynch. Also a Hall of Famer and Ring of Famer, he too played both sports at Stanford and was one of the first draftees of the Florida Marlins. Lynch actually threw the first pitch in Marlins history, has his jersey on display at the Baseball Hall of Fame in Cooperstown and pitched two seasons for the Erie Sailors in the Marlins’ farm system. In football, he is one of just three Broncos ever to make the Pro Bowl in each of his first four seasons with Denver.

Famously, Tebow gave baseball a shot with the New York Mets organization after pro football, playing four seasons and making the Eastern League All-Star team before hanging up his uniform. A Heisman Trophy winner and national champion in football at Florida, I have always felt that Tim did very well at baseball considering his remarkable 10 years away from the game.

Our seventh hitter is the catcher, our former defensive coordinator Jack Del Rio. I am always amazed by how outstanding so many guys are at different sports.

Del Rio was a very private fellow here, but we had conversations about many things, and it turns out that while at the University of Southern California, Del Rio was the catcher for future Hall of Fame pitcher Randy Johnson. Del Rio was a rugged, physical catcher good enough to have been drafted by the Toronto Blue Jays before embarking on his NFL career.

Batting eighth is one of the most popular Broncos ever, Ring of Famer Billy Thompson.

One of our greatest athletes ever, “BT” was a star football player and baseball center fielder at Maryland State, now Maryland Eastern Shore. Billy was an all-CIAA selection three times and told me he was drafted by the Baltimore Orioles, “but I never seriously considered a baseball career after being drafted by the Broncos.”

He was the only American Football League player ever to lead the league in yards per punt return and yards per kick return in the same season, which he did as a rookie, showing that he made a great choice!

Batting ninth in my fictional lineup is Jim Burris, my first general manager when I broke into pro sports with the Denver Bears back in 1974.

Burris makes my list because he is the only man in American sports history to serve as general manager of a baseball team (the Bears) and football team (the Broncos) at the same time. He preceded Lou Saban as the Broncos general manager and in fact engineered a trade for one of the greatest players in football history, bringing the colorful Cookie Gilchrist to the Mile High City. Burris was GM of both teams as a cost-saving measure by Empire Sports, which owned both the Broncos and Bears, but it nevertheless happened and was one of the most unique times in Broncos history.

The manager of this fictional team and the guy who made out the lineup card is yours truly.

I began my pro sports career with the Denver Bears in 1974, and in fact got my first ring when the Bears won the triple-A American Association championship in 1977, the same year in which the Broncos went to Super Bowl XII.

When we were celebrating our baseball title and I was getting doused with champagne back in 1977, I never could have imagined that I would have the fabulous good fortune of having repeated similar moments with the Denver Broncos.

There is no comparison in the significance of the moments, of course, but I still vividly recall that moment in 1978 when Broncos wide receiver Jack Dolbin commented on my Bears championship ring by comparing his Atlantic Coast Football League championship ring and the AFC Championship ring that commemorated the game that sent the Broncos to their first Super Bowl. He said, “I am as proud of my Pottstown Firebirds ring [from minor league football] as I am of my Super Bowl ring!”

There is nothing like championship success in the NFL, but life is a long and winding path, and those are some of the people who took some roads in baseball in addition to their memorable moments with the Denver Broncos.

Where the Broncos’ roster stands after the 2021 NFL Draft