HENDERSON, Nev. — Richie Incognito has been released. Gabe Jackson will also be cut soon (unless a contract restructure is in the offing). And Trent Brown … well, he’s on his way back to the New England Patriots in a trade that will become official March 17.

And you thought the Las Vegas Raiders had a lot to figure out on the defensive side of the ball.

Indeed, a trio of moves on the offensive line at left guard (Incognito), right guard (Jackson) and right tackle (Brown) should have quarterback Derek Carr scrambling for his life, both literally and figuratively, right? After all, the only presumed starters returning would be Kolton Miller at left tackle and Rodney Hudson at center. Suddenly, what had long been considered a team strength, at least peripherally, is more of a question mark.

As in, what, in all that is holy in the streets of Silver and Blackdom, are the Raiders doing on the O-line?

Well, for one thing, they are creating salary cap space. The Incognito ($6.35 million), Jackson ($9.6 million) and Brown ($14 million) moves saved Las Vegas a combined $29.95 million against the cap. Yeah, parting ways with the trio saves money, but at what cost? 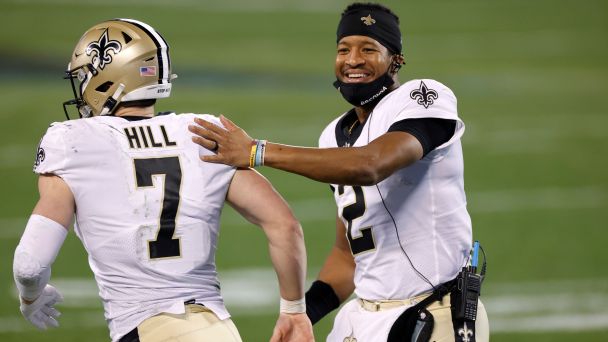 Well, Incognito, who could conceivably return on a more-team-friendly deal if there are no other suitors, will be 38 years old and is coming off an Achilles injury suffered in Week 2. So he was a relative non-factor last season.

Brown? Yikes. He has played 10-plus snaps in 14 of 32 games since signing that massive four-year, $66 million contract two year ago. Last year, he dealt with calf, weight, COVID, attitude and administered-IV issues — not necessarily in that order — and appeared in five games (he played in 16 games in two seasons with the Raiders and Pro Football Focus gave him a grade of 70.4 over his two seasons, which was just 44th at right tackle over that time).

Yeah, there’s a reason Raiders general manager Mike Mayock said last week the “jury is still out” on Brown returning this fall, and the jury returned with the trade that sent Brown and a seventh-round pick in the 2022 draft to New England for a fifth-rounder in 2022.

“We brought him in here and paid him to be the LeBron James of right tackles and he’s had a lot of adversity,” Raiders coach Jon Gruden lamented late in the season. “He’s had injuries, a number of injuries and it’s hurt our football team, no doubt. But that’s part of this business and for the time being, we’ll play the next man up.”

So who is the next man up at right tackle?

A year ago, the Raiders played Denzelle Good, Sam Young and Brandon Parker there to spell Brown. Now Good, who then replaced Incognito at left guard and was hailed as the team MVP by both Carr and Gruden, is a free agent. Same with Young.

Ideally, the Raiders would like Parker, a third-round pick in 2018, to step up and be the guy. But can he?

Re-signing Good has to be a priority, as well. Then he could slip right back in at left guard.

John Simpson, a fourth-rounder last season, could be earmarked to replace Jackson, who has been nothing if not a good soldier since the Raiders drafted him in the third round in 2014. Still, last year was the first time since 2016 he played all 16 games. And expecting Simpson to step in a year after playing in seven games and starting two might be too much to ask.

The rest of the roster when it comes to the O-line consists of a pair of centers in Andre James and Erik Magnuson, guard Lester Cotton Sr. and tackles Kamaal Seymour and Jaryd Jones-Smith.

And an intriguing name popped up this week as Kyle Long, a three-time Pro Bowl right guard with the Chicago Bears and, yes, a Raiders legacy as the son of Hall of Famer Howie Long, is coming out of a one-year retirement at age 32.

The Raiders have about $30 million in salary cap space, with more moves sure to come (Marcus Mariota? Arden Key? Jeff Heath? Jalen Richard?) and have six draft picks at their disposal after having their sixth-rounder docked by the NFL for violation of COVID protocols last season.

“What are our needs?” Mayock mused last week before the Jackson, Incognito and Brown moves had come to the fore. “How do you go about it? Can you fix some of them in free agency? If so, it’s a little bit easier to target the draft.”

And at least now, the Raiders know what holes they have to fill on the offensive line.

Tags: he million what