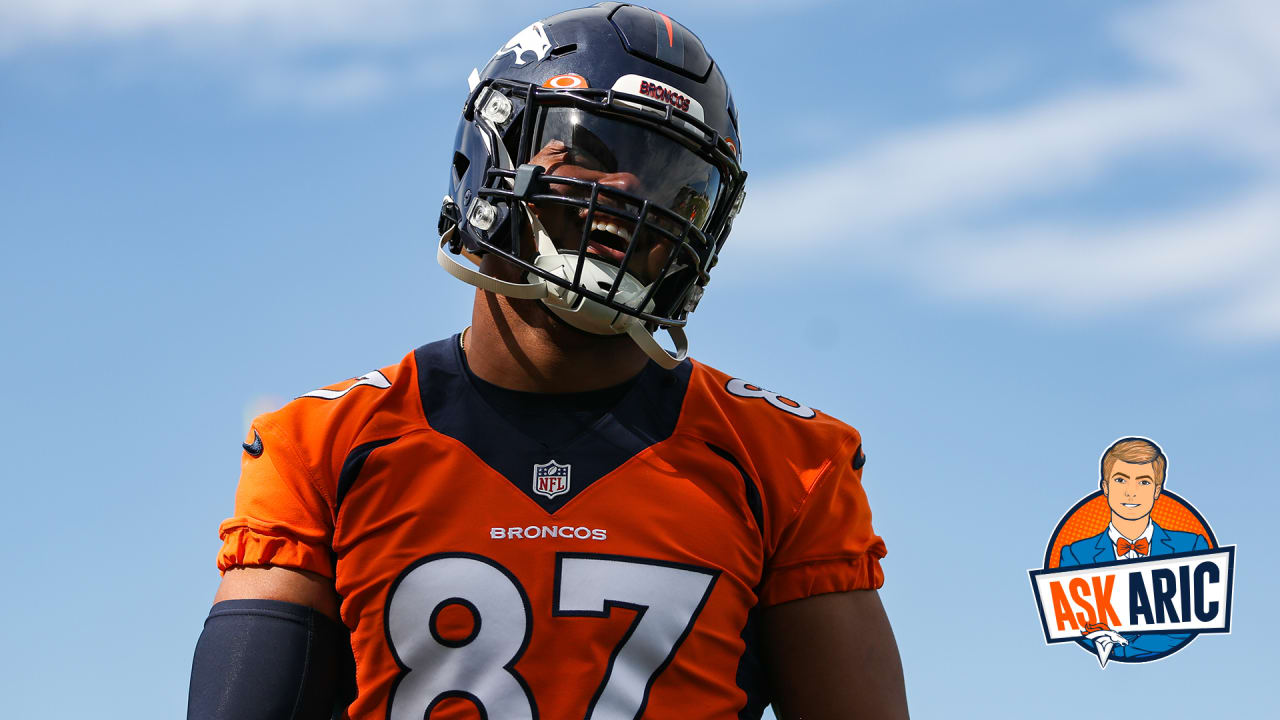 ENGLEWOOD, Colo. — The Broncos’ offseason program is complete, and summer has arrived.

In a few weeks, the team will arrive back to prepare for the 2021 season — but for now, we have a chance to both look back at the offseason and speculate about the season ahead.

In this edition of “Ask Aric,” we’ll take a look at some questions that could face the Broncos in training camp, how several big-name players could perform in 2021 and if the Broncos can finally snap a streak to their division rival.

We seem really deep at WR & DB. If the young guys show out at training camp, could we see a vet, like [Tim] Patrick traded before the start of the season? What’s the trade market like, generally, during training camp? – @EHDLO

The Broncos currently have 15 wide receivers on their roster, and depending on the number of receivers the team decides to keep, it’s possible a good player or two could be let go. Tyrie Cleveland and Seth Williams are probably the young receivers with the best chance to make the roster, but the team recently signed De’Mornay Pierson-El and Amara Darboh, and Head Coach Vic Fangio identified Kendall Hinton as one of the most impressive players during the offseason. Even if one of those players has an impressive training camp and preseason, I’d be really hesitant to trade away a player of Tim Patrick’s caliber. There’s a difference between playing well in August and playing well in December. Patrick led the team with six touchdown catches last year, and with Courtland Sutton returning from an ACL injury and KJ Hamler currently battling a hamstring injury, I wouldn’t want to get rid of a player like Patrick. Even when Sutton and Hamler are both healthy, I still think Patrick can be one of the team’s top contributors. Now, if a team approached the Broncos with a trade offer that included a second-round pick, I’d have to at least consider the offer, considering Patrick will become an unrestricted free agent at the end of the year. But barring a strong offer, I would want Patrick to remain on this team and would try to stash some younger players on the practice squad.

As for what the trade market is like, I think teams are not easily fooled. If it becomes clear that the Broncos have too much depth at cornerback and wide receiver, teams may offer a late-round pick to avoid the waiver wire order, but it’s unlikely that teams will overpay in that situation.

With Tim Patrick having signed his free agent tender, are we still able to negotiate a long-term extension this year, or do we now have to wait until next off-season, like when a player signs a franchise tag? – Alex C.

Alex, it’s a different process. The team is eligible to re-sign Patrick at any point. He would become an unrestricted free agent when the new league year begins in March of 2022.

Could the team carry seven wide receivers? If so, who do you think makes the squad? – Patrick C.

Definitely possible, especially if Seth Williams can prove his value on special teams and Diontae Spencer continues to serve as the team’s returner. In that scenario, I would expect Courtland Sutton, Jerry Jeudy, Tim Patrick, KJ Hamler, Tyrie Cleveland, Williams and Spencer will get the nod here. The big question here is if Spencer is so valuable as a returner that the team is willing to keep him with that express purpose. He certainly was in 2020, and I think he’ll do enough to earn a roster spot again. Sutton, Jeudy, Patrick and Hamler are locks, while Cleveland flashed in 2020. As I mentioned, I think Williams’ big frame and special teams ability will be enough to earn him a spot, too.

What are the chances the Broncos finally find a way to beat KC? – Brandon W.

Brandon, the drought has to end at some point. The 11-game streak that dates back to 2015 was almost snapped last year in Kansas City, as the Broncos held a late third-quarter lead. It was the Broncos’ most competitive game at Arrowhead since their last win in 2015, and they slowed down the Chiefs’ offense despite missing CB Bryce Callahan, OLB Von Miller and NT Mike Purcell. Defensive end Shelby Harris was still working his way back from a COVID-related absence, and Essang Bassey also suffered an in-game injury that further depleted the secondary.

Despite the limitations, Head Coach Vic Fangio’s defense held the Chiefs without a touchdown in four red-zone trips. The Broncos have been great in that area since Fangio took over as head coach in 2019, and they ranked first in red-zone touchdown percentage in the NFL in 2020. Teams scored six on just 47.5 percent of their red-zone attempts, which kept the Broncos in a handful of games.

The Broncos’ defensive additions should hopefully help the team remain similarly stingy in that area, and the improved offense may be enough to push Denver over the top.

It’s never smart to guarantee a win over a team that has been to the last two Super Bowls, but the Broncos should have their chances both in Week 13 in Kansas City and in Week 18 at home to end the regular season. If the Broncos want to return to the playoffs for the first time since the 2015 season, a win over the Chiefs would be a major step in the right direction. If they can split with Kansas City, it may even propel the Broncos to be in the division race late in the year.

Did we really fix the RT spot or is it just a Band-Aid? Also, RG seems a bit of an issue, are Muti and [Quinn Meinerz] going to get a chance to show they are the long-term solution at RG and C. – @Kimbert7

Well, the right tackle spot is a bit of a short-term fix just given the nature of the contracts that Bobby Massie and Cameron Fleming signed. Both players are on one-year deals, and Calvin Anderson will be a restricted free agent after the season. I’d imagine the Broncos would look for a longer-term solution in either free agency or the draft next year, but that doesn’t mean Massie — who seems like the favorite at the moment to start — can’t be successful in 2021 and potentially beyond.

I’m less concerned about right guard. Graham Glasgow was solid in 2020, and I wouldn’t expect anything less this year. Netane Muti and third-round pick Quinn Meinerz should both be high-caliber reserves if they don’t end up with a starting job.

Who has been the best RB all-around so far in [the offseason]? – @Hey_Erno

It’s hard to compare the running backs for a variety of reasons. The Broncos didn’t do a ton of 11-on-11 work, they haven’t been wearing pads and Melvin Gordon III wasn’t in Denver for much of the voluntary offseason program. That said, I will note that Javonte Williams looks as advertised. He’s a powerful-looking back and has showed soft hands in the receiving game. I think he’ll make an early impact in Denver.

How healthy will Chubb and Von be? How big of leaps can we expect from Jeudy, Fant, Hamler? -Nick K.

Nick submitted a list of strong questions, but we’ll take a look at these two in particular.

The status of Bradley Chubb and Von Miller could end up defining the Broncos’ season. Every indication is that Miller is in good shape and has the same attitude that had him poised for a strong season in 2020. Chubb, meanwhile, should be physically cleared by training camp but will likely need to be eased into team work as he continues to get his conditioning up. Of course, Nick’s question likely is a reference to their effectiveness — and that will be one of the most intriguing parts of training camp. If Chubb and Miller are at the level they played at in 2018, the Broncos’ defense should have no major weaknesses and could be one of the top units in the league. If either player isn’t able to reach their potential in the early part of the season, the Broncos’ depth at outside linebacker will be tested. The Broncos have a strong reserve player in Malik Reed, but Fangio said recently that the team needs another player or two to step up behind Reed.

As for Jerry Jeudy, Noah Fant and KJ Hamler, the short answer is that each player has a different barrier for success. Jeudy and Fant both have Pro Bowl and All-Pro potential, and it’s possible that either player could realize that ceiling in 2021. With Sutton back, it wouldn’t surprise me to see Jeudy push toward 1,000 yards and more than five touchdowns. He has game-breaking ability — and he said recently that he now has an increased understanding of the nuances of the offensive system. Fant, meanwhile, has already shown how dominant he can be at times. His challenge in 2021 will be to do that more consistently and to take over for four quarters at a time. At times last year, Fant would have a slew of catches in one half and then go quiet the rest of the game. Denver is better when he’s involved. He ranked sixth in receiving yards and seventh in receptions among tight ends last year as he posted 673 yards and three scores on 62 catches. T.J. Hockenson, Fant’s Iowa teammate who went in the top 10 to Detroit in 2019, made the Pro Bowl last year with 67 catches for 723 yards and six touchdowns. Fant would likely need a true breakout season — 100 catches, 1,000-plus yards — to earn an All-Pro spot, but he may be able to beat out Travis Kelce or Darren Waller for an AFC Pro Bowl spot in 2021.

Hamler’s step forward begins with availability. He’ll need to stay on the field to build momentum, but if he’s healthy, he has the speed to stress defenses. He made some big-time plays in 2020 and with any luck, we’ll see even more next year.