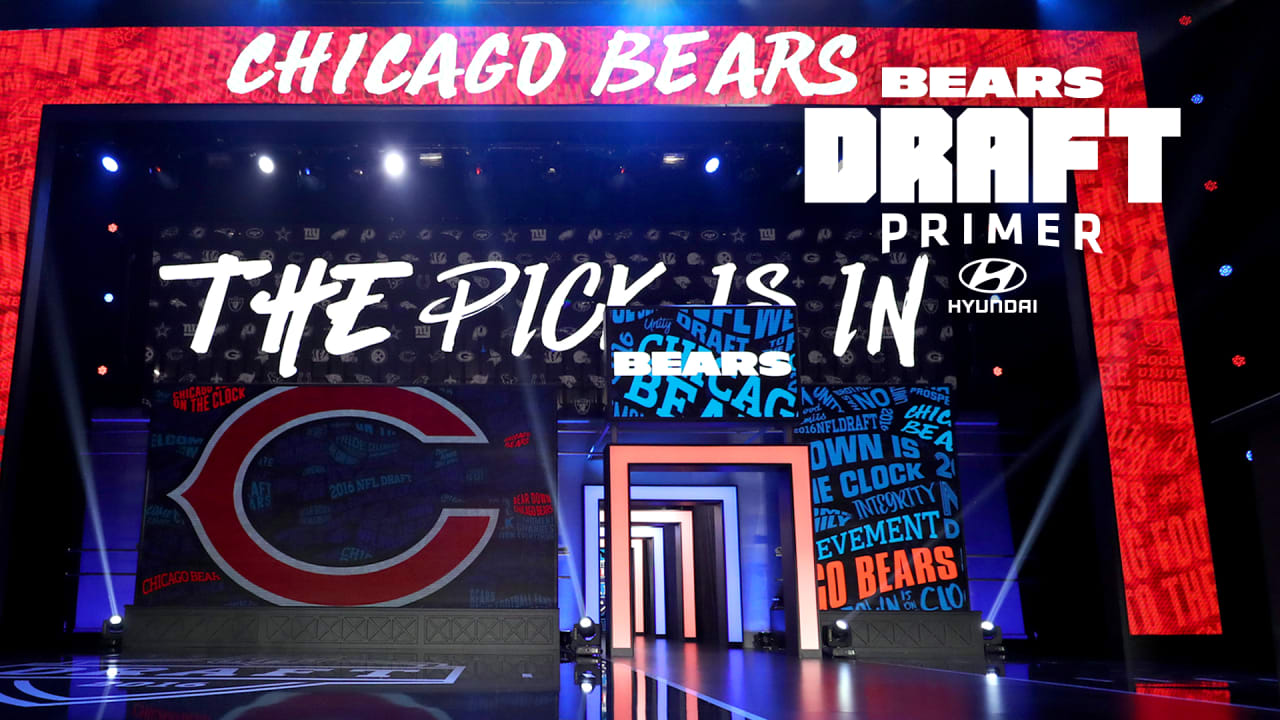 Jack Borowsky, Sports Illustrated (April 25)
Pick: Oklahoma State tackle Teven Jenkins
Comment: Unfortunately, the Bears are picking too late to take a quarterback in the first round. Jenkins will help make Andy Dalton’s life a little easier, as he can play either tackle or guard. There might not be a better run blocker in the draft than Jenkins, who plays like a bully on the field.

Dane Brugler, The Athletic (April 29)
Pick: Oklahoma State tackle Teven Jenkins
Comment: A few teams have expressed concern with Jenkins, but if the Bears want to upgrade the right tackle position, he makes sense here as a plug-and-play starter.

Charley Casserly, NFL.com (April 15)
Pick: Northwestern cornerback Greg Newsome II
Comment: The departure of Kyle Fuller created a void in the defense. Newsome is a versatile corner with good size and speed who can fill in on the back end.

Roy Countryman, Sports Illustrated (April 27)
Pick: Northwestern cornerback Greg Newsome II
Comment: The Bears had to make some painful decisions cap-wise this offseason, which included releasing high-quality starting CB, Kyle Fuller. They had Jaylon Johnson break out last season in his rookie campaign, but need a quality bookend to him, and that is what they are getting in Newsome. He is an aggressive and lanky cover corner who doesn’t give up significant separation.

Nate Davis, USA Today (April 19)
Pick: Northwestern cornerback Greg Newsome II
Comment: Plenty of gaps to plug on this roster. But barring a hard-to-execute maneuver for a young passer, probably best to address the cornerback position after the team was forced to make Kyle Fuller a cap casualty. Newsome is confident and talented, coming off a pro day performance that included a 4.38 40-yard dash.

Jeff Dickerson, ESPN Chicago (April 27)
Pick: Oklahoma State tackle Teven Jenkins
Comment: The Bears have a glaring need at right tackle, and Jenkins gets the nod over USC’s Alijah Vera-Tucker, whose ultimate NFL position is a toss-up between tackle and guard. Jenkins plays with a mean streak, and the Bears could use more nasty on their offensive line. Plus, starting left tackle Charles Leno’s contact expires after the season, so the Bears might have to overhaul both tackle spots over the next 12 months. Jenkins feels like a safe pick at a position of need. Chicago must draft a Week 1 starter at No. 20, and Jenkins seems to check every box.

Patrick Finley, Chicago Sun-Times (April 24)
Pick: Northwestern cornerback Greg Newsome II
Comment: The Bears need a quarterback. They want to trade up for one, be it in Round 1 or 2. But the cost to go from No. 20 to the top 10 — to take the fourth- or fifth-best quarterback in the draft — could cripple them for three years. They know they need a receiver and offensive line help, too. But they’ll take the best player available in Newsome to replacing Kyle Fuller, a cap casualty last month.

Kevin Fishbain, The Athletic (April 26)
Pick: Northwestern cornerback Greg Newsome II
Comment: The Bears’ draft doesn’t feel like it starts with the 20th overall pick. It starts with potentially trading up for a quarterback or trading back if they can’t. In a way, it would be somewhat surprising if they actually stayed with this pick. But if the Bears are stuck at No. 20, offensive tackle, receiver or cornerback must be addressed.

Vinnie Iyer, Sporting News (April 28)
Pick: Oklahoma State tackle Teven Jenkins
Comment: The Bears are in the market for some kind of offensive line impact and getting the prototypical right tackle to be a rock for the running game with a smooth-enough frame for pass protection is a smart move should [Florida receiver Kadarius] Toney not be available.

Adam Jahns, The Athletic (April 26)
Pick: Oklahoma State tackle Teven Jenkins
Comment: Jenkins’ nasty approach should appeal to the Bears. They need a new tone-setter. He should be able to step in and start at right tackle immediately, too. You would expect the No. 20 pick to be able to do that. Many linemen drafted in this range have been able to do just that. Germain Ifedi would then become the Bears’ utilityman up front.

Maurice Jones-Drew (April 13)
Pick: Northwestern cornerback Greg Newsome II
Comment: Newsome is a tough, physical corner whose ability jumps off the charts after a strong performance at his pro day. A good addition for the Bears.

Danny Kelly, The Ringer (April 27)
Pick: Minnesota receiver Rashod Bateman
Comment: Andy Dalton’s not the type of quarterback who can elevate an undermanned offense, but he’s good enough to help a talent-packed unit excel. Put another way, the Bears better give this man some playmakers if they want to move the ball in 2021―and grabbing Bateman here is a nice start. Paired up with Allen Robinson II, the former Gophers star would give Dalton another much-needed go-to guy from day one.

Peter King, NBC Sports (April 26)
Pick: Minnesota receiver Rashod Bateman
Comment: Getting to the throw-a-dart area of the first round. Better yet, the crowd-sourcing area of the first round. What is weird about a pass offense with Allen Robinson, Darnell Mooney and Anthony Miller is this stat from 2020: They combined to catch 212 balls—but for only 11.2 yards per catch. With a 4.38 darter in Mooney to change the pace, that yards-per-catch number is just not good enough. So here comes Andy Dalton, and the Bears have multiple needs, but another plug-and-play receiver would help, particularly now that Miller’s Chicago future is cloudy after three low-impact years.

Mel Kiper Jr., ESPN (April 29)
Pick: Mississippi receiver Elijah Moore
Comment: Moore is rising over the past few weeks, and he could make an instant impact out of the slot. This pick could also be an offensive tackle.

Nick Klopsis, Newsday (April 28)
Pick: Oklahoma State tackle Teven Jenkins
Comment: The Bears released Bobbie Massie, leaving them with a hole at right tackle. Teven Jenkins started for three years on the right side at Oklahoma State and is a powerful run blocker.

Lorenz Leinweber, Sports Illustrated (April 26)
Pick: Alabama quarterback Mac Jones (at No. 9 via a trade with Broncos)
Comment: Jones is falling down the board and … moving up for a pro-ready quarterback in Jones makes sense to give them a better chance of winning in 2021.

Corey Long, Walter Football (April 28)
Pick: USC safety Trevon Moehrig
Comment: The Bears need some secondary help, and Moehrig gives them a safety who can move around a bit. Moehrig (6-2, 208) is a tackling machine from the secondary and has solid back-to-back seasons to his credit. He came on the scene in 2019 with 62 tackles, 11 passes defended and four interceptions in his first year as a starter and had 47 tackles, nine passes defended and two picks in the abbreviated 2020 season.

Todd McShay, ESPN (April 29)
Pick: Virginia Tech tackle Christian Darrisaw
Comment: If they can’t replace quarterback Andy Dalton, the Bears will look to help him. Darrisaw could slide in at left tackle. And because he has power and is a smooth mover, he’d provide a boost for leading rusher David Montgomery in the run game.

Glynn Morgan, NBC Sports Chicago (April 28)
Pick: Minnesota receiver Rashod Bateman
Comment: Who are the Chicago Bears? A team predicated by stifling defenses and a relentless running attack? Or are the Bears a team in search of an identity that’s unrecognizable to fans and a storied legacy? This 20th pick almost feels like a pivotal choice that may define the Bears going forward … Chicago takes Bateman to play opposite [Allen] Robinson, and possibly replace him next season.

Zack Patraw, Sports Illustrated (April 28)
Pick: Alabama receiver DeVonta Smith
Comment: DeVonta Smith is a tremendous player but struggles with his size. He likely could see a slip in draft stock because of his lack of weight.

Mark Potash, Chicago Sun-Times (April 29)
Pick: Oklahoma State tackle Teven Jenkins
Comment: If a quarterback falls out of the top 10, all bets are off.

Pete Prisco, CBS Sports (April 27)
Pick: Oklahoma State tackle Teven Jenkins
Comment: They need to get help up front at right tackle and Jenkins could step in and be an immediate starter. He plays with a nasty streak. I would also consider Stanford quarterback Davis Mills here.

Michael Renner, Pro Football Focus (April 28)
Pick: Miami edge rusher Jaelan Phillips
Comment: Phillips is the most NFL-ready edge defender in the class, and he is fresh off earning an 83.0 run-defense grade and an 87.6 pass-rushing grade in 2020 for the Hurricanes. The best part is that he got appreciably better as the season went along. Phillips’ concussion issues will have to be vetted, though, as he was forced to medically retire from UCLA early in his college career.

Chad Reuter, NFL.com (April 23)
Pick: North Dakota State quarterback Trey Lance (at No. 8 via a trade with Panthers)
Comment: Chicago can’t stand pat if it wants to become a Super Bowl contender. Andy Dalton was a nice pickup for the 2021 season, but finding a true playmaker at the position is the only way the Bears can climb the NFL power rankings. They’ll trade their first- and third-round picks this year (Nos. 20 and 83) and next year’s first-rounder to move up.

Peter Schrager, NFL.com (April 29)
Pick: Oklahoma State tackle Teven Jenkins
Comment: Chicago’s offense wasn’t very good last year. One reason for that: The injuries across the offensive line early in the season. Once the younger guys got going, the team started to gel a bit more down the stretch. With the run on tackles in full swing, the Bears draft one of the last first-round prospects on the board at 20.

Ryan Wilson, CBS Sports (April 29)
Pick: Virginia Tech tackle Christian Darrisaw
Comment: The Bears could try to trade up for a QB or wait to get one in Round 2. Here they could target offensive line or wide receiver and we have them going with O-line to protect current QB1 Andy Dalton.