Running back Cam Akers is expected to miss the entirety of the 2021 season after rupturing an Achilles tendon while working out.

“You just feel so bad for him because he’s doing everything right, he’s working hard,” Rams coach Sean McVay told ESPN 710 in L.A. on Tuesday.

After a promising finish to a rookie campaign that included 561 rushing yards and three touchdowns over the final two months, including the playoffs, Akers was anticipated to produce a breakout season as the Rams’ featured back and provide run support for quarterback Matthew Stafford.

“It’s a big loss,” McVay said. “But it is an opportunity for others.” 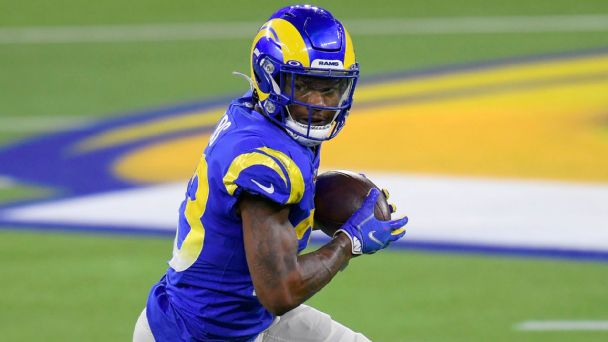 • How Rams will try to replace Akers
• Murray: ‘More weapons than I can ask for’
• Don’t sell McCaffrey short after injuries
• Falcons use Walsh fellowship to boost diversity

Third-year pro Darrell Henderson Jr. will step into the starting role and the Rams will test the abilities of several late-round picks and undrafted free agents throughout training camp, including Xavier Jones, Raymond Calais, Jake Funk, and Otis Anderson.

“What you do feel good about is you’ve got some young depth on the roster,” said McVay, who has made three playoff appearances in four seasons as coach. “And it will earn guys an opportunity to really see alright, how do they handle a little bit more of a workload, how are they able to handle some competitive opportunities we’ll have.”

Although not in the immediate plan, McVay did not rule out the possibility of looking outside the organization to acquire a veteran running back.

But as the Rams prepare to open camp at University of California-Irvine on July 28, it will be on the 5-foot-8, 208-pound Henderson to carry the load.

With a knack to bounce outside the tackles and ability to catch passes out of the backfield, McVay called Henderson the “change of pace” back that he had been in search of when the Rams selected him with a third-round pick in 2019 out of Memphis.

Over the summer, Henderson was slowed during the offseason program because of an undisclosed injury, but McVay expressed optimism that he would be ready for the season.

“He’s feeling better and better,” McVay said last month. “We expect him to be full speed by the time training camp rolls around.”

The Rams signed Jones as free agent last year after he went undrafted from SMU, where he led the nation in scoring his senior season, producing 11.5 points per game while rushing for 23 touchdowns. Jones played in 13 games on special teams last season and was among players general manager Les Snead said took a step forward this offseason.

Claimed off waivers from Denver after training camp last year, Calais was a seventh-round pick by the Tampa Bay Buccaneers in 2020. He appeared in four games for the Rams last season, all on special teams.

What you need to know about the Los Angeles Rams:

The Rams picked Funk this past May with seventh-round selection in anticipation that the rookie could contribute on special teams, but Funk now also has the opportunity to compete for carries on offense. In five seasons at Maryland, Funk suffered two ACL tears; however, in a condensed five-game season because of COVID-19 in 2020, Funk rushed for 516 yards and three touchdowns on 60 carries.

As a rookie last season, Akers led the Rams with 625 yards and two touchdowns on 145 carries and he caught 11 passes for 123 yards and a touchdown. Akers added to his season total with two standout playoff performances against the Seattle Seahawks and Green Bay Packers, when he rushed for 131 and 90 yards, respectively.